While both TeamVodafone co-drivers held their start positions off the line, Luff gained three positions by Lap 15 and Dumbrell seven, to be sitting third and 12th respectively. 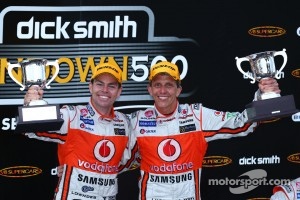 The TeamVodafone co-drivers opted to double stint in their respective Holden’s and after two very quick first pitstops, Luff moved into second and Dumbrell gained another six positions.

Dumbrell claimed another two scalps before making a charge for teammate Luff on Lap 62. The #1 driver succeeded and moved into second.

With the race leader pitting on Lap 72, Luff came in on the following lap to hand the wheel to Lowndes. Another quick stop by the TeamVodafone pitcrew put the #888 driver out in front of race leader, David Reynolds.

Pitting on Lap 74, Dumbrell and Whincup executed an almost perfect driver change and the #1 Commodore merged onto the track in front of both Lowndes and Reynolds, to assume the race lead.

Maintaining their positions as the race progressed, Whincup ran off track briefly on lap 140 after locking a wheel, opening the door for Lowndes to take the race lead.

With three laps to go, Whincup was battling to hold second from a charging Mark Winterbottom, the Ford driver lunged up the inside of Whincup at Turn 9 pushing the TeamVodafone driver wide and back into third place.

Whincup remains 32 points ahead of Mark Winterbottom in the V8 Supercars Championship points standings with Lowndes now third on 2353 points.

The Brisbane-based team will return the home to prepare for the biggest race of the year, the Supercheap Auto Bathurst 1000.

P13 despite race fraught with drama on Sandown 500