Lowndes and Luff kings of Sandown

CRAIG Lowndes is the new king of Sandown after pressuring Jamie Whincup into a mistake that gave him another Dick Smith Sandown 500 – and Warren Luff his maiden V8 Supercars race win.

The TeamVodadone duo ran 1-2 on lap 140, with Whincup in front, but Lowndes had chased his team mate down relentlessly since the final round of pit stops, edging closer and closer without actually placing a move on the championship leader.

With the pressure at tipping point, Whincup ran wide at turn two on lap 141 and bounced the #1 Holden across the grass, the race instantly slipping from his championship-leading fingers. 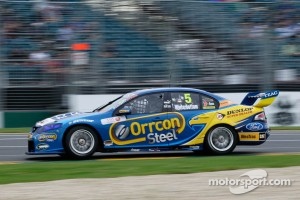 Capitalising on the error, Lowndes slipped by and it was there where the race was won and lost.

The critical move gave Lowndes his fifth Sandown 500 triumph in eleven starts and his eighth ‘500-km endurance race win, when you include races held at Queensland Raceway and Phillip Island.

The result also gave co-driver Warren Luff – who held the #888 TeamVodafone Holden inside the top three during his opening double stint – his debut V8 win after seasons of alternating between full-time and co-driver duties.

“It was one of those things that late in the first set of tyres I faded away a bit. I had too much understeer and killed the rears trying to look after the front,” Lowndes said.

“We worked on the car and tried to chase it and I was surprised when we came out so far behind Jamie at the beginning of the final stint.

“It was great in the last stint to have a good balance and it really came on strong towards the right end.

“I was a bit lucky with the lapped traffic holding Jamie up a bit to close the gap down quicker. I think all three of us were on a par in track position.”

Added Luff: “For me today, it was all about getting the car to a point where Craig could jump in.

“Early on we probably didn’t have a car that was quick enough but we made it better as the race went on. Bring on Bathurst in three weeks”

With Lowndes clear in the lead, the next battle was for second place and it was Orrcon Ford Performance Racing driver Mark Winterbottom the aggressor.

He muscled past Jamie Whincup with two laps remaining to snare second position from the championship leader, the FPR Falcon he shared with Steve Richards in the hunt all day.

After several attempts, Winterbottom sent a move down the inside of Whincup on lap 159, the two cars making content with Whincup forced out wide into the dirt as the blue Ford drove up the road to a strong podium.

The combination had started only 15th, however Richards pitted some six laps before the majority of the leading contenders and the extra laps on fresh Dunlop rubber were good enough to instantly elevate the #5 car into the top four.

Whincup was third in the end, after Paul Dumbrell charged the #1 car from a lowly 19th place starting position with a stunning double-stint in the race’s early stanza.

Dumbrell had climbed to sixth by lap 42 and continued his relentless march forward before handing over to Jamie Whincup on lap 74 – the championship leader emerging in the lead to complete a sterling comeback from the former Sandown race winner.

Van Gisbergen had looked to challenge Tander for fourth in the closing laps but didn’t quite have enough, dropping behind to secure fifth.

The Bottle-O Racing Ford of David Reynolds and Dean Canto had led the race early, however slow stops cost them any shot at a podium finish.

They dropped to third – behind the TeamVodafone duo – on the second round of stops when Reynolds took over from Canto, and then slipped further down the order when they dropped a further 10 seconds on their final stop, that included a brake rotor change.

Reynolds charged home, finishing sixth after emerging from the stops two places further down the order.

Tim Slade and Andrew Thompson had a quiet day and finished 7th, one place ahead of Stone Brothers Racing team mates Lee Holdsworth and Craig Baird.

James Courtney and Cameron McConville had a solid day to finish ninth with Jonathan Webb and 19-year-old rookie Scott McLaughlin combining to compete the top 10.

The race began with a surprise, Greg Ritter erupting from the second row of the grid to lead the field into the turns two-three-four complex on the opening lap.

Ritter held the Fujitsu Racing Holden into the top spot for 14 laps, before locking a brake on the run into turn 8 (Dandenong Road) the following lap and spinning out of contention – eventually finishing 14th.

The race was interrupted by just two safety car periods across its 161 laps, the first on lap six when Allan Simonsen made contact with the rear of Christian Klien’s Supercheap Auto Commodore – forcing the former Formula 1 driver into a hapless Tony D’Alberto who became stranded in the turn eight gravel.

The second came at exactly half-distance, when Taz Douglas turned Steve Owen’s VIP Petfoods Ford around at the same corner.

The contact dislodged a tyre bundle that became stranded in the middle of the circuit, necessitating the Safety Car to fix the damage.

The race was relatively drama-free from there, with 27 of 28 starters classified as finishers – only the Pepsi Max Crew Holden failed to finish after experiencing ongoing oil pressure dramas first noted in the morning warm up.

Event organisers announced a three-day crowd of over 57,000 people for the return of the 500 to Sandown.

Just 119 points cover the top three in the championship heading into the Supercheap Auto Bathurst 1000 – the closest ever margin between three contenders heading into the annual October classic.

P13 despite race fraught with drama on Sandown 500