Winterbottom Too Strong In Qualifying Race

The Orrcon Steel Falcon pilot snatched the lead from Shane van Gisbergen on the opening lap and held on to claim victory from Jamie Whincup.

"When you've got a good car, you have confidence and I felt good," said Winterbottom.

You've got to make sure that every race the other guys beat you, they earn it.

"You've got to make sure that every race the other guys beat you, they earn it. We'll try and make the car a little bit better, but it makes you feel good about yourself.

"Us front two drove away. We need to make our car better on drive (exit) of the right hand corners."


The unique 'drop zone' format created plenty of interest, with three cars per lap dropped out of the race between laps three and eight.

Winterbottom will start from pole for this afternoon's second race, which is the first to award points towards the $100,000-to-win prize pool.

Today's Qualifing Race saw a lap two crash eliminate both Jason Bright and Michael Patrizi, with the Team BOC and Tekno crews left with a pile of work. 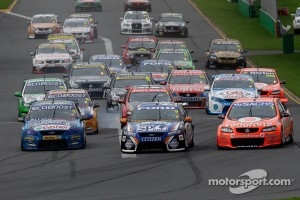 All of the front runners elected to use soft tyres in today's race; the highest running driver to use hard tyres was Lockwood Racing's Fabian Coulthard.

The Kiwi started 16th and was 18th when he was eliminated from the race.

Two From Two For Frosty at Albert Park