We’re Going Back – Back to Victory Lane!

Editor’s Note: In honor of Interstate Batteries’ and Joe Gibbs Racing’s 20th anniversary together in NASCAR, a series of press releases highlighting 20 big moments will be distributed throughout 2011. This is the eighth of the 20 releases. 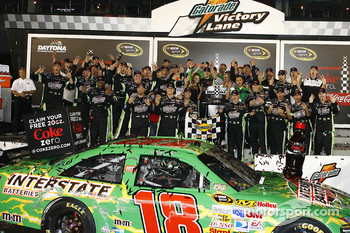 Jarrett, who drove for JGR from 1992 through 1994, scored the first and perhaps biggest win for the famous green machine by capturing the 1993 Daytona 500 and followed that up by winning at Charlotte (N.C.) Motor Speedway in fall of 1994. Bobby Labonte, who took over for Jarrett at JGR in 1995, took the Interstate Batteries car to 21 victories in eight years, including the 1995 Coca-Cola 600 at Charlotte, the 2000 Brickyard 400 at Indianapolis Motor Speedway and the 2000 Southern 500 at Darlington (S.C.) Raceway.

He also delivered JGR’s first championship in 2000 while driving for Interstate Batteries.

Labonte had several near-misses en route to winless seasons in 2004 and 2005 before departing JGR before the 2006 season. J.J. Yeley took over the Interstate Batteries machine for 2006 and 2007, but also failed to find victory lane.

For 2008, talented Kyle Busch was brought into the JGR fold. Interstate Batteries, meanwhile, scaled back the number of races where the Dallas-based company served as the No. 18 car’s primary sponsor. Nonetheless, it was only a matter of time before Busch returned Interstate Batteries to victory lane – and he nearly did it in his first race.

“I remember watching Bobby Labonte drive the Interstate Batteries car as a kid growing up,” Busch said. “He and Dale Jarrett made that car famous, so to return it to victory lane at a place like Daytona was special to me.

“We were able to get Interstate Batteries a victory earlier in the year in the Nationwide Series race at Phoenix, but I know how bad Norm (Miller, chairman of Interstate Batteries) and everyone at Interstate wanted to get back to victory lane in the Sprint Cup Series. It was a night I’ll remember for the rest of my career, for sure.”

Since that victory in Daytona, Busch helped Interstate Batteries accomplish the NASCAR “trifecta,” as he also delivered a NASCAR Camping World Truck Series victory with Interstate Batteries as a primary sponsor on his Kyle Busch Motorsports Toyota Tundra in November 2010 at Texas Motor Speedway in Fort Worth. The win gave Interstate Batteries a victory in all three of NASCAR’s top divisions, and also gave the No. 1 replacement brand battery in North America a long awaited win at its home track.

“Interstate has been such a great supporter to me since I came to Joe Gibbs Racing in 2008,” Busch said. “Every once in a while I still see someone with a ‘Smile with Kyle’ button that Norm gave out during my first season. Norm and everyone at Interstate Batteries has become much more than a sponsor to me and Samantha (wife). They’re great friends to us, and it’s always fun when we get to put on the Interstate Batteries colors.

“When I do hospitalities or appearances for Interstate, it’s amazing to me how supportive not only their employees are, but all their dealers and distributors. They’re so loyal. You meet people that have worked for Interstate Batteries for 25 years, or they’ve been a dealer or distributor for 40 years and they’re so proud of their association with Interstate. It’s really, really cool, and just knowing the history of the No. 18 car and Interstate Batteries, it’s a privilege for me to continue on with the legacy that was built before me.”