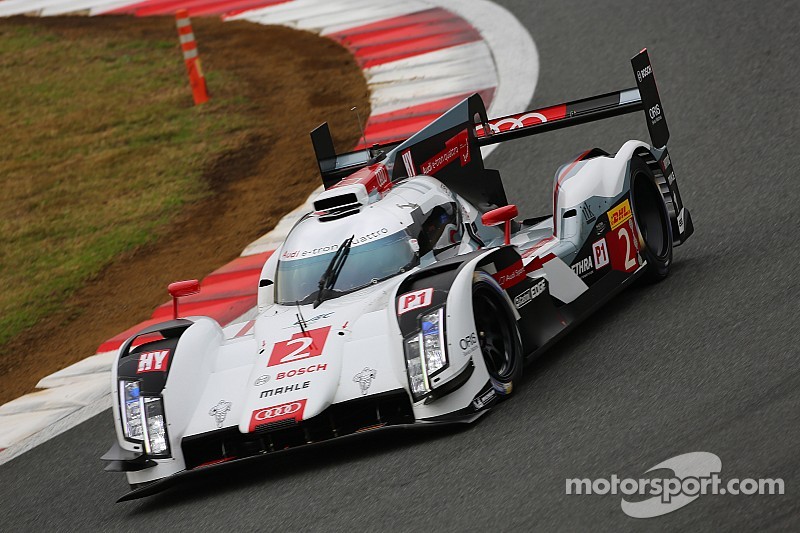 The three-time Le Mans winners were in damage limitation mode at Fuji Speedway.

With the track not suiting their Audi R18 e-tron quattro and in cooler-than-expected weather conditions, the three-time Le Mans winners were in damage limitation mode at the former Japanese Grand Prix venue, eventually coming home in sixth place.

But whatever the result, the #2 Audi crew always remain united and undeterred, shaking off frustration as quickly as possible. After triumphing at the previous two WEC rounds – the Le Mans 24 Hours and 6 Hours of COTA – they faced a tougher outing at Fuji Speedway. Nevertheless, no sooner had the chequered flag fallen than the trio were poring over data in order to learn from the race.

In theory the Shanghai International Circuit, which hosts the next WEC round, is not tailor-made for our car either,

“The pace was not there,” explained a contemplative Benoît afterwards. “We had a good first free practice session, and we knew our rivals were going to unleash their speed during qualifying and the race. However, we did not expect them to be quite so quick.”

While the German squad has an inclination of what caused their relative performance to drop, they remain somewhat uncertain of the origin.

“We could not make the tyres work properly, meaning we experienced a tougher race than our team-mates in the #1 car,” continued the Frenchman. “I also think that, unlike our rivals, the track layout did not suit us. Our R18 e-tron quattro is at its best in high-speed corners. Fuji only features two of these, with long straights and tight turns making up the rest of the circuit. Two fast corners is not enough for our car to really stretch its legs. That said, the gap was still substantial, so we must make the most of this experience and learn from the weekend. We need to study, understand, work, and improve.”

This setback will not prevent the Audi squad from fighting until the very last race, an attitude the German marque and their drivers pride themselves on.

“In theory the Shanghai International Circuit, which hosts the next WEC round, is not tailor-made for our car either,” Benoît stated, “so we must work to improve our performance. The top priority will be to assess the data and identify our issues. The temperature at Fuji certainly didn’t help as it was noticeably below the seasonal average: Japanese autumns are usually warmer, hence our struggle to heat the tyres.

Lastly, the hybrid category was not the best suited to the track’s demands and characteristics. In the end, a combination of those factors meant we were slightly on the back foot compared to our rivals. Fuji Speedway is not like Silverstone or Austin, and it’s very different from Circuit de la Sarthe!”

Against the backdrop of Fuji’s Sacred Mountain, Benoît, André and Marcel were keen to put their performance into perspective. A few hundred kilometres away at Yokkaishi’s Mie General Medical Center, their friend Jules Bianchi is currently fighting the toughest and most important battle of his life.

“We all thought about him a lot,” reflected Benoît, who was visibly affected as he glanced at the ‘Forza Jules’ sticker on his crash helmet. “Be it inside or outside the cockpit, Jules remained on our minds all weekend. We are well aware that the news so far has not been the best, but we will keep hoping for a positive outcome.”