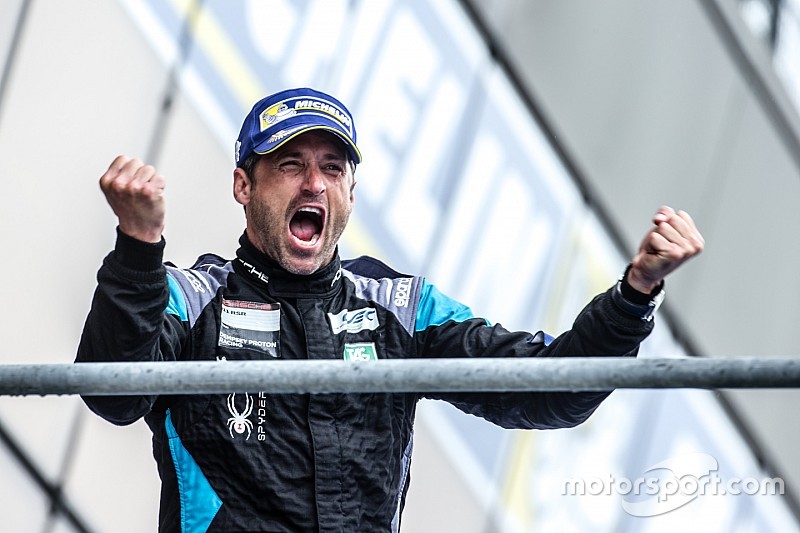 The popular American actor has decided to take a step back from racing to focus on his "family and acting career," having recently reconciled with his estranged wife.

Outside of motorsports, Dempsey's tenure on the hit TV show Grey's Anatomy as Derek Shepherd ended last year, as did his 16-year marriage to makeup artist Jillian Fink. They have since reconciled.

Reaching the top step of the podium

During that same year, Dempsey finally reached the top step of the podium in his professional sports car racing career, winning the Fuji round of the 2015 FIA World Endurance Championship. Earlier in the season, he placed second in class in the prestigious 24 Hours of Le Mans endurance classic.

Along with four starts at Le Mans between 2009 and 2015, Dempsey competed in a total of 68 races between Grand-Am, ALMS and the recently formed hybrid of the two -- The IMSA WeatherTech SportsCar championship. He scored nine podiums, which includes high profile races such as the Rolex 24, Sebring 12 Hours and Petit Le Mans at Road Atlanta.

Patrick Dempsey to focus on "family and acting" in 2016

But he will not add on to his growing racing resume this year. Dempsey has released a statement, announcing that he will not compete in any events this season, although his team will continue to do so.

My motorsports journey has been a rewarding one and allowed me to meet so many interesting people.

While the focus so often is the performance of the car, in reality it is all the various personalities, from team mates to competitors to officials to fans that I remember the most. I have loved being part of part of different teams and sharing the experience with so many great friends. I want to thank everyone who made this possible and helped me along the way. I also wanted to especially thank the fans for their support and friendship. None of this would happen without you buying the tickets and attending the races, so I am grateful for that investment in my passion. It makes me especially happy to see how many people have become race fans during my racing career.

At this point in my life, after an amazing season thanks to my friends at Porsche and TAG Heuer, I need to take a step back and focus on both my family and my acting career.

Dempsey-Proton Racing will continue on racing a Porsche 911 RSR in the World Endurance Championship season. I hope my schedule permits me to enjoy some race weekends at least as a team owner.

I need to especially thank Porsche for their unbelievable support for me and my family as I made the tough decision to take a step back. I will never forget it. Life has taught me that it is impossible to predict the future.

I am excited to see what kind of journey I can make and enjoy.