A new concept in racing, sharing the information with everyone.

Nicolas Perrin, of Perrinn Limited is hoping to launch a new LMP1 project with the hopes of having his car on track for testing before the end of the year.

But his approach is completely different than every other prototype project done before.

Instead of secrecy, Perrin hopes to bring fans and investors together with an open-source model, in what he is calling myLMP1.

Perrinn has spent three years designing a four-wheel drive prototype to take on the Audis and Toyotas of the WEC.

The idea behind the open source aspect of the program is to allow anyone, from engineering students to normal fans, to look at every piece of data and designs to be able to give their input.

“This is the culmination of three years of research to get [to this point] of the project,” Perrin said in an interview with Endurance-Info. 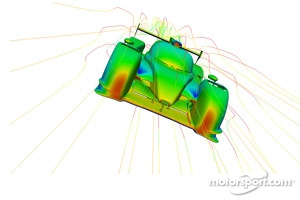 “This fairly new idea struck me as the right solution. We would share the story of an innovative team. It has never been [done] in motorsport, as everything is [usually] hidden. Everything [with the myLMP1] will be open-source. That is to say that we will open our information to everyone, for free. The goal is to have the maximum number of fans and supporters. Everything will be available in real-time on our website. The idea is to attract partners in a different way.”

According to the website, Perrinn will be sharing every bit of information from construction and aerodynamic data all the way down to live team radio, and team strategy during races via the website.

Perrinn is putting the final touches on the project, and getting the last of the backers in place to have the first car rolled out by the end of the year.

“We want people to realize that in some way, this program is theirs,” Perrin said.

“They are not expected to make any contributions for access to the information. Fans can even [interact] and make suggestions in real time. We will put in place a dedicated team to do this. The build of a LMP1 car is a technological project. With our concept, we will expand the scope of education by inspiring a new generation of scientists. Everyone can suggest things through a school or university. Anything is possible.”

Ferrari F2005 to race in Bahrain