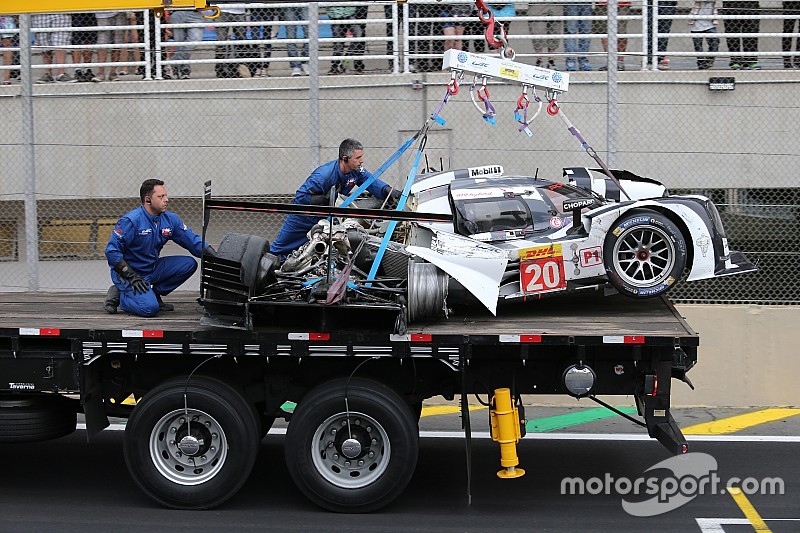 Mark Webber says the fear of being involved in another major accident, like the one he suffered at Interlagos in 2014, played a part in his decision to retire from racing at the end of 2016.

The Porsche WEC star announced prior to last month's Fuji race that his current campaign will be the last of his motorsport career, bringing to an end his three-year stint in endurance racing.

Discussing his decision in more depth, Webber brought up the bad memories of his violent Interlagos crash two years ago, in which he was hospitalised and sustained concussion and bruising following a collision with the Ferrari of Matteo Cressoni.

Also seeing teammate Brendon Hartley have a major crash at this year's Silverstone season-opener after a tangle with the Porsche of Michael Wainwright – albeit with the New Zealander escaping injury – contributed to Webber's decision to hang up his helmet at the end of 2016.

"The Brazil crash was horrible for Ann, my wife; that was a really hard moment for her," recalled the Australian in Fuji.

"I was very lucky in Brazil, it was an enormous impact. And it was the longest time I'd ever taken to recover from a crash. That was an education, to say the least.

"And then you see Brendon in Silverstone… that's part of the racing. That will always be there.

"And in fact sometimes I've been in the car in the last while, and I've said – 'why am I in the car?' And when you ask yourself that question, it's time to stop.

"On race weekends, a bit more often I think 'I'd rather be somewhere else'. That's not good."

'Le Mans and I didn't love each other'

While adamant he has no regrets about never winning the Le Mans 24 Hours, Webber admitted his experience of 1999 – where he suffered two major aerial crashes at the wheel of the Mercedes CLR – had coloured his relationship with the La Sarthe event.

"[The 1999 race] was one of the hardest points of my career to get over," he said. "I just didn't love the whole two-week experience, to be honest.

"Every year, going there 10 days before the race starts… you think 'God, let's just get the race going.' Maybe the race and I didn't love each other."

"Le Mans this year was exceptional for me in terms of performance. It was clarification that I did everything I could. I was pretty much the fastest guy there for Porsche.

"You can do it for five more years, have a technical failure, your teammate crashes… that's the race. If I didn't have my F1 results, it might be a bit different.

"But I'm comfortable with what I did with Porsche, and part of me has won Le Mans, because I helped developed the car [that took wins in 2015 and 2016]."

Opinion: And then there were two - what next for LMP1?