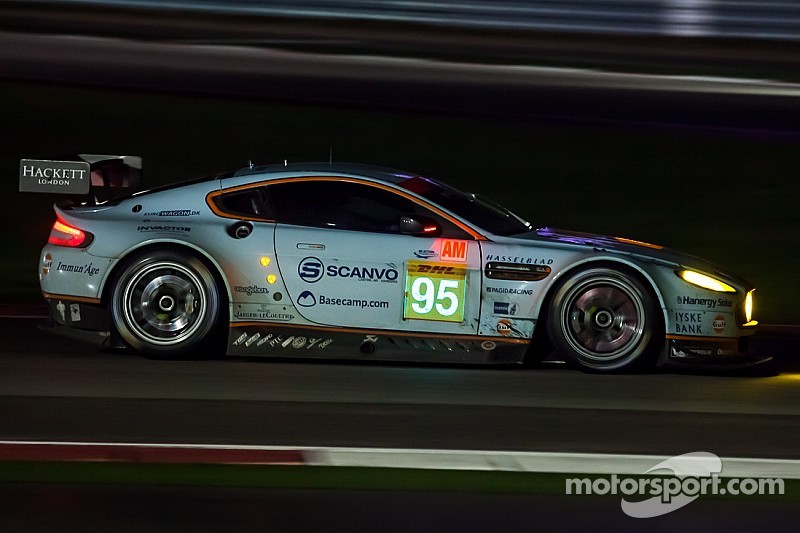 Sixth consecutive podium finish of the season at Shanghai.

Young Driver AMR made a further step to the ultimate goal of the 2014 Season, the World Championship title in the FIA World Endurance Championship (FIA WEC). At the sixth round of the series at Shanghai in China, championship leaders Kristian Poulsen and David Heinemeier, who raced with together with Richie Stanaway, finished second in the GTE Am class in the Aston Martin Racing entered Young Driver AMR-Aston Martin Vantage GTE.

The second place in China was the sixth consecutive podium finish of Young Driver AMR, the #95 Aston Martin finished first or second in all rounds of the season.

As in the previous rounds, the Young Driver AMR trio had an all race long battle with the #98 Aston Martin Racing sister car. During the six hour long race, Poulsen/Heinemeier Hansson/Stanaway took the lead three times, but finally finished second after the #98 Vantage GTE, in which "Young Driver" Christoffer Nygaard scored his second win of the season.

"Considering our solid lead in the championship, we decided for a conservative approach of this weekend", Jan Struve of Young Driver AMR explained. "Here in China, our sister car was a little bit quicker and we were not looking for the ultimate pace and didn’t took any risks. Richie Stanaway could have pushed much harder at the end of the race, but we told not to risk anything.

The main goal was to bring the car to the finish and score good points. This is what we did. We have only two more rounds to go and we made a further important step towards the title. Our Young Driver Christoffer Nygaard, who races this year with the #98 crew, won today and we are very happy about him taking the win."

"It’s great to be leading the championship, but the #98 team are giving us a good battle,” commented Heinemeier Hansson. “Either way, an Aston Martin and an Aston Martin Racing works driver has won the GTE Am championship, which is fantastic for the team, but we are going to do whatever we can to make sure it is us!"

In already two weeks, the penultimate round of the season will take place at Bahrain. Young Driver AMR leads the GTE Am teams championship by 31 points, while Poulsen and Heinemeier Hansson have an equal lead in the GTE Am drivers championship and are still the best placed Aston Martin Racing drivers in the World Endurance Cup for GT drivers.

Team Championship GTE Am class after six of eight rounds