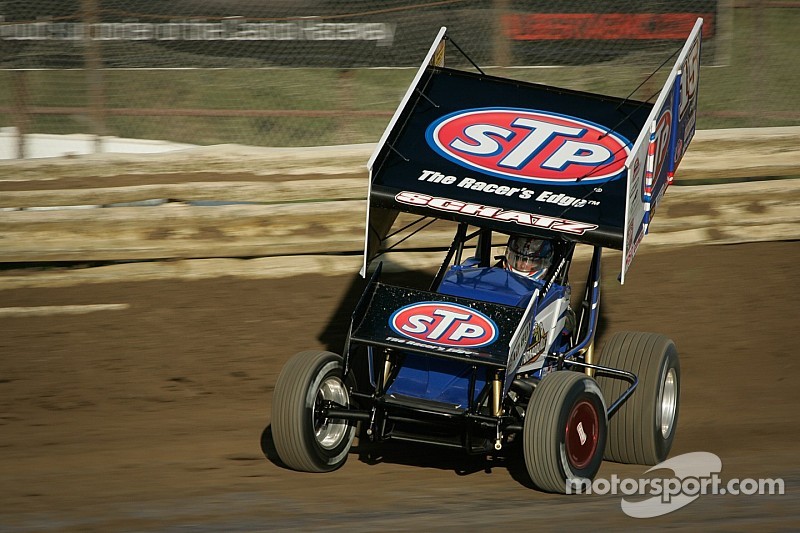 "I've had a lot of good runs here," Schatz said. "I've won this race several times - it's always good to get the win. I've always had a lot of fun here."

In addition to winning the $10,000 to win first feature, the five-time champion won a $5,000 bonus for taking home the Don Martin Memorial Silver Cup XXIII. This was Schatz's ninth win of the season.

As the green flag flew on the first of the twin 30-lap features, Paul McMahan led early as Ed Lynch Jr. challenged for the lead. By lap five, both Daryn Pittman and Schatz, who started fifth, got around Lynch and set their sights on McMahan. Schatz took over the second place spot in his STP/Armor All car a lap later and began to reel in McMahan. Schatz briefly took over the lead on lap 12 before taking it over for good on lap 16.

As McMahan faded through the waning laps of the first feature, Kerry Madsen charged forward, trying to catch Schatz. He had one last shot following an open red with three to go, but he wasn't able to close the gap.

Schatz said that his success at Lernerville Speedway comes in part from the fact that track fits his driving style.

"The surface has always been great here," Schatz said. "It's tough to get hold of. You have to have some finesse but yet be aggressive. That fits me."

Cody Darrah won the second feature of the night, his first win at Lernerville and his second Outlaws win of the season. Darrah finished the first feature in 17th and through the inversion, started from the pole for the second.

As the green flag flew, the Pennsylvania Posse's Danny Dietrich jumped out to an early lead. For the first ten laps, Darrah looked for a way around Dietrich in Ollie's Bargain Outlet car and finally found it. Darrah took the lead on lap 11 and never looked back. As the two battled through lapped cars, Dietrich looked for opportunities and closed the gap several times, but was not able to make a move.

"[Getting the win] feels awesome," Darrah said. "The way this race plays out doing the full invert, that's the biggest thing that gets you into that second race to get you up front. I'd like to say I was sandbagging the first one but honestly I was racing as hard as I could for that last spot. We worked on our cars, we went off our teammates to capitalize on that front row spot."

As the Outlaws continue their swing through Pennsylvania, the stiff competition presented by the Posse showed up Tuesday night at Lernerville. In addition to Dietrich, Tim Shaffer, a native of Aliquippa, Pa. finished third in the second feature.

"It's just a real good feeling to come out here and run second. I thought we had a fast car, fast enough to win. It just wasn't our night," Dietrich said. The driver of the Sandoes Fruit Market/Hickory Run Orchards car said he and his team will go fix some of the problems they had tonight and hope to take him wins at Lincoln Speedway and Williams Grove Speedway in the coming days.

Schatz added slightly to his lead in the race for the World of Outlaws STP Sprint Car Series Championship. He now has an 80 point lead on second place Daryn Pittman and a 99 point lead on third place Paul McMahan.

The World of Outlaws STP Sprint Car Series continues its swing through Pennsylvania this week, stopping next at Lincoln Speedway on Thursday before two nights, Friday and Saturday, at Williams Grove Speedway for the Summer Nationals. After that, the Outlaws head to Lebanon Valley Speedway and Fulton Speedway in New York.