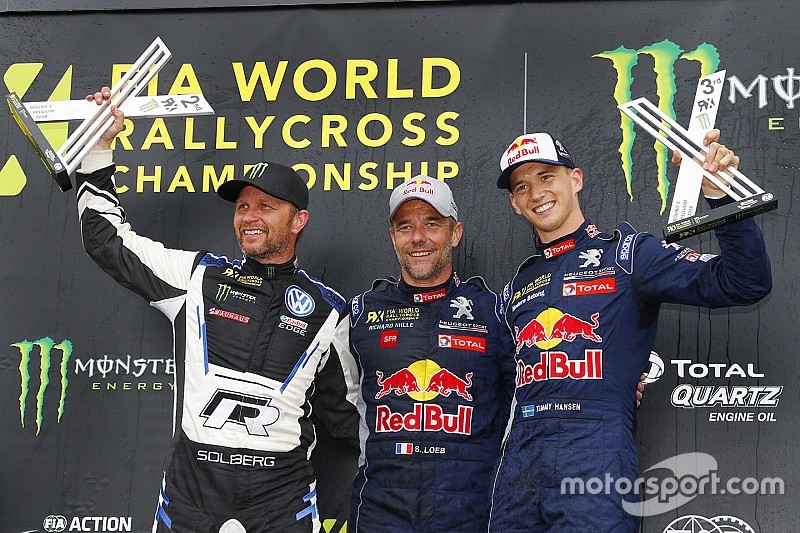 Peugeot driver Sebastien Loeb ended Volkswagen’s dominant run in the World Rallycross Championship by winning the Belgian round at Mettet.

The Peugeot team’s 208 WRX had been fastest away from the start line all weekend and it was no different in the final, rally legend Loeb taking the lead as pole sitter and points leader Johan Kristoffersson narrowly avoided rolling his Volkswagen Polo Supercar in the run to turn one.

Squeezed into the barriers on the inside, Kristoffersson’s car was then saved from rolling by leaning on teammate Petter Solberg’s Polo, the pair running deep, allowing third-row starter Timmy Hansen, who had entered the first corner of semi-final two backwards after contact, to climb to second behind Peugeot teammate Loeb.

Kristoffersson ran third on the opening lap, Solberg behind diving straight into the joker at the first opportunity from fourth, before setting a pair of fastest laps of the day to close the gap on Audi pair Andreas Bakkerud and Mattias Ekstrom, who swapped positions in the opening stages, Bakkerud having to take evasive action to avoid hitting the wall on the outside of turn one when he was forced wide.

Reacting to his teammate's joker, Kristoffersson was next to take his compulsory extra-route on lap two, but emerged on the main circuit behind the sister Volkswagen, the pair both advancing a position when Bakkerud took his joker on lap three.

In a bid to cover off the Volkswagen pairing, Loeb and Hansen both took their jokers on lap four, releasing Ekstrom into the lead while Loeb maintained track position from those who had already taken the alternative route.

Just a week after bidding farewell to his DTM career, Ekstrom bettered Solberg’s fastest lap twice, but couldn’t extend a big enough margin to finish on the podium.

The Swede dropped back with his lap six joker, as Loeb retook the advantage to score his second career World RX win and the first for Peugeot since his maiden win in Latvia 2016.

Solberg finished second with Hansen third, Ekstrom taking fourth by less than a tenth of a second in a dash to the line with Kristoffersson. Bakkerud was sixth.

Belgium World RX: Solberg ahead on Day 1 despite damage