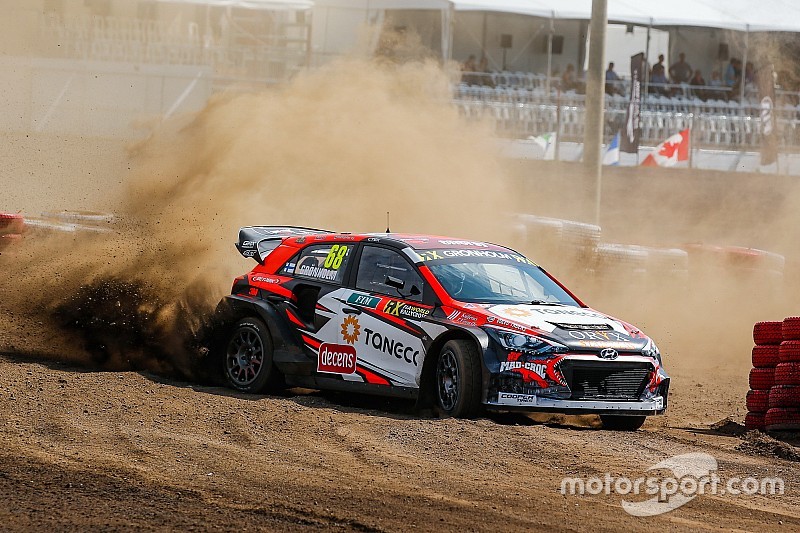 Niclas Gronholm leads the Canadian round of the World Rallycross Championship at the end of day one, despite losing time in traffic in his opening two qualifying races at Trois-Rivieres.

The Hyundai i20 driver took an early joker lap in his Q1 race from second in a bid to overhaul leader Anton Marklund, but after dropping valuable time in traffic, Marklund was able to beat Gronholm at the joker merge on the final tour. Gronholm wound up sixth.

Having then been beaten into the lead of his race in Q2 by Marklund’s GCK teammate Guerlain Chicherit, Gronholm again ducked into the joker on the opening tour, and despite dropping time behind Latvian campaigner Janis Baumanis before the Fiesta driver removed himself from the equation with a lap three joker, Gronholm leapfrogged Chicherit and set the best time to move into top spot.

Gronholm’s ascendancy was in part thanks to Q1 victor Andreas Bakkerud losing out to Marklund and teammate Liam Doran at the start of the first race in Q2, when the track was at its slipperiest thanks to light rain between the sessions.

Doran had been second overall in Q1, then pulled off an impressive outside move through the loose-surface turn four on Marklund for the race lead on the first lap of their Q2 encounter, but he was slowed by a technical issue and is eighth at the close of the day.

Bakkerud meanwhile, despite being eighth in Q2 held onto second overall, with Chicherit third thanks to a second best time in Q2.

It was a solid day for the five-car GCK squad. In a third Renault Megane, Rokas Baciuska passed Krisztian Szabo on the final lap of his race in Q1, before dropping down the order when he was handed a five-second track limits penalty.

With the race order reversed by random draw for Q2 (the fastest drivers from Q1 running in the first race), Baciuska won the final race of the day and was third fastest, lifting him back into the semi-final paying positions.

Championship leader Kevin Hansen also fell victim to a track limits infringement, a five-second penalty in Q2 placing him 11th in the session, to add to his 10th best time from Q1 after the Hansen MJP driver got held up in traffic.

His teammate, brother and closest points rival Timmy Hansen also had a difficult day. Fifth in Q1 after a close race with Timur Timerzyanov, the older Hansen sibling then took a lap one joker in his Q2 race, but made a mistake in the slippery conditions, touched a tyre barrier and lost ground to the pack ahead. 14th time in the session leaves the Swede 11th, one place ahead of Kevin.

Gallery: Showdown between Schumacher, Villeneuve in 1997