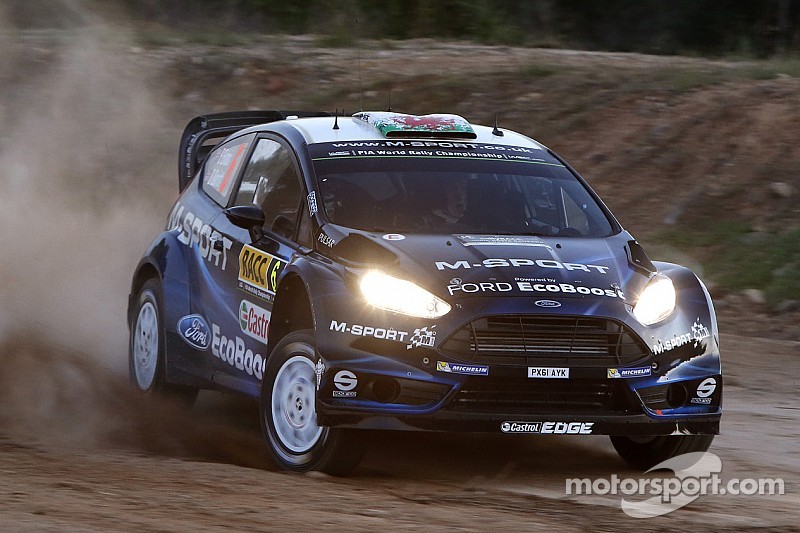 As the event enters its final phase, Mikko Hirvonen has established a 30 second cushion over fourth-placed.

With the Ford Fiesta RS WRCs converted from gravel to asphalt specification during last night’s 75 minute service, Hirvonen was keen to start the day on a high and did just that with an impressive run on what is generally considered to be his least preferred surface.

As the only dual surface event in the WRC, the key to success is to affect a clean transition from one surface to the next; and Hirvonen had that fully under control.

I’m getting a good feeling with these tyres and the car – they’re just working really well for us.

Benefitting from the team’s extensive pre-event asphalt test, the Finn drew confidence from Michelin’s upgraded Pilot Sport tyre. Having found the optimum set-up, his Ford Fiesta RS WRC worked in harmony with Michelin’s hard compound tyres – allowing him to set back-to-back third fastest times through ‘Tivissa’ (SS8) and the first pass of ‘Escaladei’ (SS10) which propelled him into a podium position.

Embarking on the afternoon loop, Hirvonen and co-driver Jarmo Lehtinen continued to impress – another string of competitive times safeguarding their third place. As the event enters its final phase, the Finn has established a 30 second cushion over fourth-placed man Mads Østberg and has his eyes firmly fixed on adding another podium to his tally.

In the sister M-Sport Fiesta RS WRC, Elfyn Evans was quick to put yesterday’s disappointment behind him. Getting back into the rhythm of asphalt rallying through the morning stages, the Welshman was able to identify areas for improvement and maintained that there was a lot more to come.

Working to find the best set-up over the afternoon loop, he and co-driver Daniel Barritt continued to identify areas for progression and will be well versed on the Spanish Tarmac when they return to the stages for the second time in a world rally car next year.

Mikko Hirvonen (3rd) said: “We’re in a good position and on Tarmac as well so that is really good. I’m getting a good feeling with these tyres and the car – they’re just working really well for us. I’ve been really happy all day and we’ve not had any problems at all.

“We’ve managed to get a good gap between ourselves and Mads [Østberg] so I won’t have to go absolutely flat-out all the time tomorrow. I can control the situation and monitor his splits, but we still need to have a good rhythm. I’m pretty confident that we will be able to do it.”

Elfyn Evans (16th) said: “On the whole I think it’s been a fairly difficult day for us. As we’re not in a specific fight we’ve been playing around with the set-up and trying to learn for the future. We’ve been trying to find something that suits my driving style a bit better but we didn’t go in the right direction this afternoon which made the going a bit tough. We’ll do some more changes over night to see if we can improve tomorrow.

“Mikko [Hirvonen] has done a fantastic job today and is really making the set-up and tyres work for him. We’re on a similar set-up but we have marginally different driving styles so it’s all about finding what works best for me.”

Team Principal, Malcolm Wilson OBE, said: “Mikko [Hirvonen] has had an incredible day. He had a really positive pre-event test and I think that gave him a lot of confidence going into today’s asphalt stages. He knew that he could make the new Michelin tyres work for him – there’s more movement in this compound which really suits his driving style – and it was great to see him so happy at the end of the day.

“Elfyn [Evans] struggled a little today. Unlike Mikko [Hirvonen], he hasn’t been able to find a set-up that suits his style of driving, but that is the sort of thing that comes with experience. Of course he’s a little disappointed, but he’s building all of the knowledge and experience that he needs for the future. He’s made some more changes this evening, so hopefully he’ll have a better feeling tomorrow.”