The Volkswagen pairings of Latvala/Anttila and Ogier/Ingrassia have gradually worked their way up the overall standings.

The top four within 153 metres and 24 centimetres – the Rally France is set for one of the greatest showdowns in the history of the FIA World Rally Championship (WRC). After 255.56 of 312.14 kilometres against the clock, just five seconds separate the leader from fourth place. Out in front: Volkswagen duo Jari-Matti Latvala/Miikka Anttila (FIN/FIN). 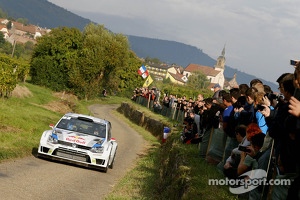 Saturday’s action in France featured unsettled weather and fast sections through forests, vineyards and villages – sometimes on a wet surface, sometimes on drying asphalt. The day drew to a close with a spectator stage in Mulhouse. The Volkswagen pairings of Latvala/Anttila and Ogier/Ingrassia have gradually worked their way up the overall standings.

Only on the final stage of the day did Latvala/Anttila move into the lead. Ogier/Ingrassia, who were crowned World Rally Champions* in both the driver and co-driver competitions on Thursday, won five of seven stages on Saturday to climb into third place overall. They are now 3.5 seconds ahead of their rivals Loeb/Elena with 56.58 kilometres of special stage still to go.

(*) Subject to the official publication of the results by the FIA.

Jari-Matti Latvala, Volkswagen Polo R WRC #7: “I think this is the closest rally I have ever been involved in. It is incredibly close at the top, with only a few seconds separating the first four – that is really impressive. Today’s tests were really tricky, but we still coped very well with the changing conditions, did not take too many risks, and made it to the finish without making any mistakes. It is obviously a great feeling to lead the Rally France overnight, but we have not won anything yet.

We will try to maintain our rhythm and be consistently quick and safe. Tomorrow it will be crucial to choose the right tyres, as the weather forecast is difficult and we have six back-to-back special stages. Anyone who gets the tyre selection wrong, could wave goodbye to any hopes of victory in the morning. It will be an exciting final day, that much is certain.”

Sébastien Ogier, Volkswagen Polo R WRC #8: “That was a virtually perfect day for us. I never thought that we would get back into the race this weekend. The fans can look forward to a real showdown tomorrow. Four drivers within a matter of seconds – it will be a fantastic battle. Victory would obviously be the icing on the cake – but the most important thing is that we already have the cake! I felt much better in the car today, and the Polo R WRC worked perfectly in difficult conditions out on the route. Luckily I found my rhythm again, and we also gave it 100 per cent on every stage.”

Andreas Mikkelsen, Volkswagen Polo R WRC #9: “I have had better days in the WRC. In this morning’s first loop I was struggling with understeer entering the corners and oversteer when exiting them. The conditions were extremely difficult today. It alternated between wet and dry asphalt, and there was mud on the road in places. After changing the set-up, I coped a bit better in the afternoon. All in all, I had envisaged the day panning out very differently.”

Jost Capito, Volkswagen Motorsport Director: “The Rally France is a fantastic advertisement for rallying. Four men fighting for every tenth and overall victory, including two Volkswagen drivers. Then there is also the thrilling duel between two World Champions – what more could you ask for as a rally fan? The difficult conditions, with both wet and drying surfaces, really put the drivers to the test today. Sébastien Ogier produced a magnificent performance today and has climbed into third place. Jari-Matti Latvala leads by just four tenths of a second. Tomorrow will be a thrilling battle for overall victory, and one everyone in our team is looking forward to.”