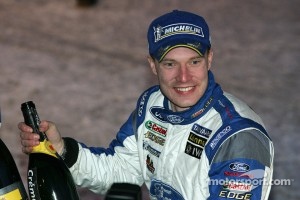 Fresh from his victory at the 60th Rally Sweden earlier this month, Ford World Rally Team’s Jari-Matti Latvala has shown his support for the FIA WRC Academy and the skills it provides some of the world’s most talented young drivers as they work their way through the WRC ranks.

In order to conquer the WRC, drivers must have a working knowledge of both gravel and asphalt rallying, how to approach them and how to maximise their speed on each one. Providing the necessary skills to impress in all conditions, this year’s WRC Academy calendar is designed to expose competitors to a range of events – each requiring a different approach and driving style.

The feeder series gets underway at the 2012 Vodafone Rally de Portugal. Blending fast open roads with more technical sections, this traditional gravel rally provides the perfect example of loose surface rallying. Moving to the demanding stages of the Acropolis Rally of Greece, competitors will learn the importance of mechanical sympathy before embarking on the super quick stages of Neste Oil Rally Finland. As one of the most unpredictable rounds of the season, the constant change of grip through the vineyards of Trier will see the ADAC Rallye Deutschland put driver’s and co-driver’s skills to the test before they contest some of the smoothest asphalt roads of the season at the 2012 Rallye de France Alsace. With its mix of both gravel and asphalt, the season finale will see competitors put all they have learnt into practice at the RACC Rallye de España.

As well as providing the skills to master the stages, the WRC Academy also equips young drivers with the focus and positive mentality needed to endure the pressures and demands of competing on the world stage. With a dedicated programme including expert tuition on pre-event preparation, mental coaching and goal-setting, the WRC Academy is unique in fully preparing rallying’s future stars for competition at the very highest level.

“The [FIA WRC] Academy is a great initiative. I came through the WRC ranks as a young driver myself and one of the most important things to have is expert guidance the likes of which the [WRC] Academy provides. You need to learn how to best attack the stages, how to drive on all kinds of surfaces, and how to cope with the pressures of rallying on the global stage. The Academy is the best example of this today and it is great that Ford and M-Sport are supporting the programme.”