Neuville and Al-Attiyah are both looking at their best finishes in Rally Mexico.

Qatar World Rally Team’s Thierry Neuville and Nasser Al-Attiyah put in a sensational performance on the third round of the FIA World Rally Championship (WRC) today. Finding the perfect balance between speed and control, the pairing are both on course to secure their best ever result at Rally Mexico with Neuville occupying the final podium position and Al-Attiyah going strongly in fifth. 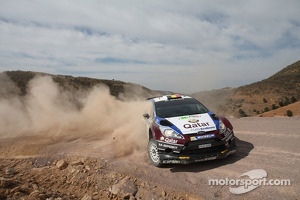 Ushering in some classic ‘Rally Mexico’ stages, the second full day of competition saw the Qatar M-Sport crews tackle 150 km in the mountains north-east of the rally base in León. Characterised by wide, open roads interspersed with sections of intricate hairpins and twisting corners, the day may not have been as challenging as yesterday’s excursion but remained treacherously fast and capable of catching out even the most experienced of crews.

Although a daunting task lay ahead, it was not to faze Belgium’s latest protégé. Knocking the steering of their Fiesta RS WRC out of kilter on the first pass of Ibarrilla (SS14), Neuville and co-driver Nicolas Gilsoul managed the situation perfectly. Taking a cautious approach over the morning’s remaining tests, the pairing made it back to service where the team were able to repair the issue for the following loop.

Proving that anything can still happen, the battle for second place was brought right back into contention on SS18 as a puncture for rival Mikko Hirvonen brought the gap down to just 7.2 seconds. But the young Belgian is a clever one and, no matter how strong the temptation to push for another place, vows to keep his head and concentrate on maintaining what is set to be his maiden podium in the WRC.

Thriving on the long stages Rally Mexico has to offer, Al-Attiyah and co-driver Giovanni Bernacchini were also displaying some impressive speed. Setting the fourth fastest time on the first pass through the longest stage of the day – Otates (SS15) – the Qatari was 8.5 seconds quicker than fourth-place man Dani Sordo and a full 30 seconds faster than his time through the same stage last year.

Continuing his good form over the afternoon loop, Al-Attiyah is on course for fifth place and his best ever finish at Rally Mexico.

Elsewhere in the Qatar M-Sport World Rally Team squad, Evgeny Novikov and Ilka Minor were disadvantaged running first on the road. Cleaning the dusty stages for the cars behind, the Muscovite was denied the opportunity to challenge for top times as he had yesterday. Yet battling on, the young charge continued to showcase his potential – consistently setting times worthy of the top-ten.

But there was disaster for Østberg and co-driver Jonas Andersson. After completing the first pass of Ibarrilla (SS14), the Norwegian reported an issue with the clutch of his Fiesta RS WRC. Setting the second fastest time through the stage, the issue clearly hadn’t hindered the 25-year-old’s pace and he was on course to manage the problem and maintain what was a strong second place.

Unfortunately it was not to be and on the liaison between SS14 and SS15, Østberg’s Fiesta suffered an electrical fault. Despite his best efforts, the Norwegian was forced to make an untimely retirement and will restart under Rally 2 regulations tomorrow when his focus will be firmly set on the all important Power Stage.

“Obviously I am disappointed for Mads [Østberg] because he was doing really well, but this is rallying and sometimes these things happen. We are now in a podium position and we should try to continue like this and make sure we finish in third if not even higher!

“Maybe if things go our way we can push Mikko [Hirvonen] all the way to the finish. But honestly, if I finish on the podium – whether it be in second or in third position – I will be very happy.”

“I am really happy with the performance today. Tomorrow will be another day and another story, but we will try to push and bring home this good result on out first time here with the [Ford] Fiesta [RS WRC]. We’ll try to manage the long stage without any problems and regardless of whether we finish fourth or fifth it’s a great result for us.

“Thierry [Neuville] has been fantastic today. It’s very important for him because last year he showed the speed, and this year we have tried to help him maintain the speed but make it to the end of the rally.

“I feel very sorry for Mads [Østberg] because he has had a very good rally so far and today’s retirement was not through his mistake. But these things happen and I hope he can come back strongly tomorrow and win three points in the Power Stage.”

“Today has not been so easy running first on the road because we have had to do a lot of cleaning and, especially on the first pass, there are no lines to follow. But this is how it is and we just need to ensure we get to end to salvage some points for the team. We’re back in the top-ten now which is a positive, and with the long stage tomorrow [Guanajuatito – SS21] there is still a lot that can happen.”

“The clutch didn’t feel quite right off the start line, but we didn’t realise that there was a problem until we got into the more technical part of the stage. You need to use the clutch on hairpins, and when I pushed it to the floor, nothing happened. It was a bit of an inconvenience, but we were in a strong second position and that wasn’t going to be us out of the rally.

“But then on the road section to SS15 we had a warning on the dash and five minutes later, that was it. It was an electrical problem and we had no power going to the engine. It was just one small problem, but sometimes it’s the same ones that can have the biggest impact.

“Obviously this is very disappointing for us. We were taking time out of Mikko [Hirvonen] and on target for a good result – not only in the rally but in the championship too. There are still a lot of positives to take from the event and I think we proved that we are capable of setting a very good pace. It’s just frustrating and you need to let yourself feel the disappointment before you clear your head and start again.”

“The entire team is extremely disappointed for Mads [Østberg]. He was having a fantastic rally and I’m only sorry that the car let him down this time. I have now doubt that he’ll bounce back tomorrow and he’ll certainly be a real contender for the Power Stage.

“Thierry [Neuville] and Nasser [Al-Attiyah] have been very impressive today. Thierry especially has shown supreme calm under pressure and I have really seen him progress as a driver of late. There is still a long way to go, and we’ll be pushing Mikko [Hirvonen] right up to the final stage tomorrow.”

Adbulaziz Al-Kuwari continued to dominate the WRC-2 category in his Seashore Qatar Rally Team Ford Fiesta RRC. With an impressive six minute lead over his nearest rival, just three more stages separate the Qatari from victory on this his season debut on the world stage.

“We won’t sleep until tomorrow afternoon. We need to make sure we keep full concentration tomorrow because, with a gap like this, it is very easy to lose it. But all in all it’s been another good day for us. We’re improving all the time and our pace has improved over the second pass.

“We still have the long stage tomorrow [Guanajuatito – SS21], which will be one of the biggest challenges of the rally. But I am looking forward to it and it will certainly test our fitness so we can see how strong we are physically!”