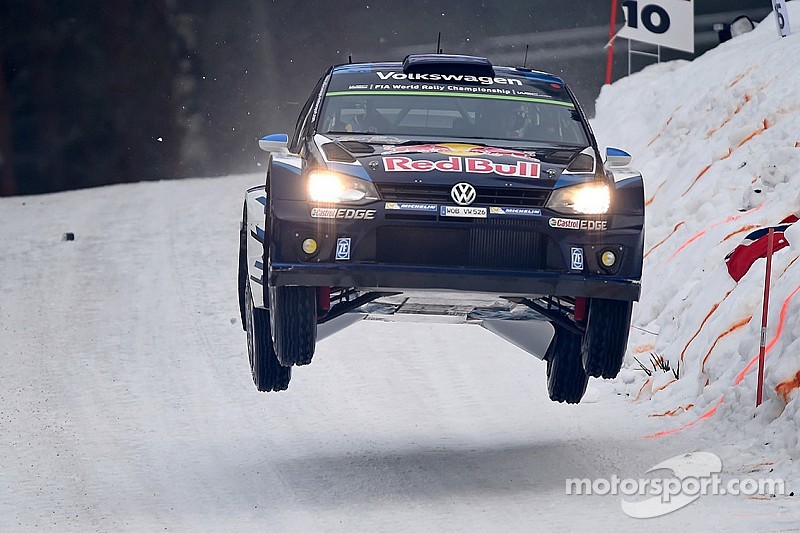 Mikkelsen takes 3s lead into powerstage – but lost 3.8s on previous run through it.

Andreas Mikkelsen has snatched the lead of Rally Sweden, but charging Volkswagen world champion teammate Sebastien Ogier is just three seconds behind him, ahead of the final powerstage.

Hyundai’s Thierry Neuville started the final day with a 1.5s lead over Mikkelsen, but that was turned around on the very first stage when Neuville hit a snow bank, and blamed an intercom problem that meant he didn’t hear co-driver Nicolas Gilsoul’s vital pacenote.

Ogier set the fastest time on that stage, eroding his overnight deficit of 9.6s to 6.8s as teammate Mikkelsen retook the lead, with Neuville 3.8s behind him in second.

Ogier was fastest again on the Varmullsasen test, that is re-run for the powerstage, despite “a couple of mistakes”. But that was not as many errors as Mikkelsen made, as “not a clean stage” lost a vital 3.8s to Ogier.

It means they went into the showdown just 3s apart, as Neuville dropped to third, but he is only 4.6s off the rally lead himself.

Citroen’s Mads Ostberg lost fourth place this morning when he locked up and ploughed into a snow bank on the opening stage, blaming a malfunctioning handbrake that dropped him to 10th.

Ford’s Elfyn Evans and Citroen’s Kris Meeke passed Martin Prokop on the second stage of the day, who put his car on its side after a “huge 5th gear moment – I have no idea how we continued, it was a really massive moment!”

The Brits are now sixth and seventh respectively.

Points up for grabs for the DS 3 WRCs!