Sebastien Ogier chose his starting position due to setting fastest qualifying time yesterday, and he turned that to his advantage to take the early lead in the Swedish Rally.

Sebastien Ogier completed a hat-trick of stage wins this afternoon to increase his lead to 32.2sec with just a repeat of last night’s curtain-raising super special stage in Karlstad remaining.

The Frenchman was fastest through the final Vargasen forest test by 6.6sec in a Volkswagen Polo R, his fifth win from six stages emphasising his dominance. Ogier benefited from the best start position, but that advantage was earned with fastest in qualifying yesterday. 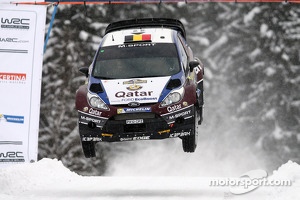 “Incredible. It’s a really good feeling. This morning wasn’t perfect but it was enough with a good road position. This afternoon was perfect,” reflected Ogier.

Sebastien Loeb and Jari-Matti Latvala battled all day for best of the rest behind Ogier. Four times the duo swapped positions but an intercom problem for Latvala in Vargasen meant Loeb holds second, a slender 1.5sec ahead of the Finn.

The Citroen DS3 driver was third fastest in SS6, 2.0sec ahead of Latvala, and said: “It started to be hard for the tyres in here. I had two spares and used them both. The road is cleaning because the times behind me are faster. Tomorrow our start position will be closer to the others.”

Mads Ostberg, in a Qatar M-Sport Fiesta RS, was the only man other than Ogier to win a stage today. A 20sec road penalty imposed when the Norwegian was late starting stage three after stopping to fix a leaking water pipe left him fourth, 42.8sec from the lead.

But the Norwegian, tipped by many as a potential winner, remains confident. “We have good speed and we should be able to catch Loeb and Latvala tomorrow, but Ogier is just too fast,” he said. 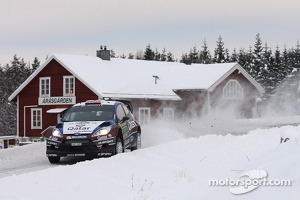 Behind Ostberg in fifth is Evgeny Novikov. He is 10.5sec clear of Pontus Tidemand, the young Swede excelling on his championship debut in a World Rally Car, with Juho Hanninen a further 29.0sec behind in seventh.

Thierry Neuville, Henning Solberg and Martin Prokop, all in Fiesta RS cars, round off the top 10.

Grondal dropped a minute when he left the road on SS2, but a succession of rapid times since, including stage wins on SS4 and SS5, enabled him to pull clear.

Al Rajhi, from Saudi Arabia, rounded off a strong day with a stage win in Vargasen, while championship leader Sepp Wiegand is third, 1min 07.7sec behind Al Rajhi.