As the FIA WRC Academy crews continued their ‘meet the driver’ sessions at Rallye de France - Alsace last weekend, the youngsters had the opportunity to put their questions to one of the strongest and most promising partnerships in the FIA World Rally Championship (WRC) – Volkswagen Motorsport’s Sébastien Ogier and Julien Ingrassia. 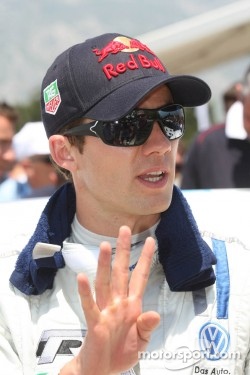 As Rallye de France victors in 2011 and one of the most talented up-and-coming personalities in the sport, Ogier was the obvious choice for the WRC Academy competitors to probe with their questions in France.

Having claimed five WRC wins last year, the Frenchman made the move to Volkswagen for the 2012 season and went on to secure the highest ever WRC finish for a S2000 specification car when he piloted his Škoda Fabia S2000 to sixth place overall on the previous Tarmac round in Germany.

Sharing their experience and advice, the pairing spoke of their satisfaction and excitement regarding the development of Volkswagen’s Polo WRC – behind the wheel of which the Frenchman will contest the 2013 season and has already racked-up more than 5,000 km of testing.

Ogier also recounted how he progressed in his early career. With the support of the FFSA, the then 22-year-old paid just €20 to enter a selection process that eventually won him a funded season in the French Peugeot Cup. Having had this experience, he was well placed to comment on the importance of one-make series such as the WRC Academy – allowing pure talent to make the difference when all involved compete behind the wheel of equally-matched machinery.

In addition the pairing had a few tips on-hand for the WRC Academy competitors as they embarked on the final all-asphalt round of the season. Principally, the duo warned that caution with cornering and cuts was crucial to securing a strong result and explained how best to get heat into the tyres on the closed-surface roads – an art which could prove pivotal given the close-fought nature of the one-make series.

Supported by Ford Racing in Europe and with control tyres from Pirelli, the WRC Academy competitors will next contest the season finale in Spain where they will be looking to put the Volkswagen Motorsport pairing’s advice into practice.

Timo Van der Marel said: “It was really cool to chat with Sebastian [Ogier] and Julien [Ingrassia]. They’re both really good guys and had a lot to say.

“Sebastian spoke about how he got to where he is now, and the unusual path he took to get there. A lot of people thought it would not be possible to get to the top of the sport through the route he took – with very little personal money – but he let his talent do the talking and proved them all wrong!

“Julien also gave us some advice on how to tackle the stages in France this year. He told us about the poles which are placed on some corners to prevent cutting which meant that we were even more prepared when it came to the recce.

“The most interesting thing they had to say was when they were comparing all the different cars that they had driven in recent years and how the approach to set-up and driving style differs slightly with each car.

“It was really encouraging to know that even the guys at the top of the field, in some of the best cars around, still have to contend with the same things we do!”

Sébastien Ogier said: “It seems that the drivers and co-drivers [in the FIA WRC Academy] intend to make the grade! To succeed, they must know each area of rally; not only driving the cars, but learning about sponsorship, about fitness, about everything. The questions they asked were very intelligent and it is a great opportunity for these young guys to partake in a series such as the WRC Academy.

“I started with a Peugeot Cup in France where we all had the same car with no possibility of making changes to ride height or suspension, it was really basic. In the beginning, you have to prove that you are able to be fast with this car and to adapt to the situation and to be better than the others who have just the same as you. In the beginning, this is really good because you know that everybody has the same and that your talent just has to make the difference.”

MINI will cease its works team at end of 2012