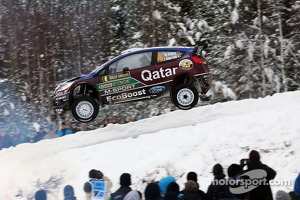 It was an eventful start to the second round of the FIA World Rally Championship (WRC) for Østberg and co-driver Jonas Andersson. With their Fiesta RS WRC suffering a water leak over the first pass of Lesjöfors (SS2), the Scandinavians turned mechanics on the liaison to SS3. Despite incurring a 20-second penalty for a late check-in due to his delays on the road section, the team’s young charge set the second-fastest time on SS4 – just 3.1 seconds adrift of the stage win. Proving his technical skills are just as effective as his skills behind the wheel, an undeterred Østberg went on to claim the fastest time through the following test (SS5) ready for a resurgent attack over the afternoon loop.

The morning also saw troubles for Matthew Wilson. Becoming lodged in a snow bank on the first stage of the day (SS2), the Brit lost over five minutes having to dig his Fiesta RS WRC free from the snow’s clutches.

Elsewhere however, despite struggling to find a good rhythm on the slippery, snow-covered stages, Hänninen set a consistent pace as he and co-driver Tomi Tuominen worked to find confidence on what is only their second competitive outing with the WRC-spec Fiesta. Novikov also impressed – a haul of sixth-fastest times setting the Muscovite up for another top-five finish. Neuville similarly showed flashes of speed to put the young Belgian in contention for a promising finish on only his second venture to Rally Sweden.

Østberg continued to showcase his abilities over the afternoon loop. Consistently on the pace, the Norwegian secured a string of second-fastest times – beaten only by rally leader Sébastien Ogier. Although opting for a risky strategy – with just one spare tyre compared to his rivals’ two – the 25-year-old overcame the disadvantages and now lies just 10.9 seconds adrift of equalling his best ever result of second on the event.

Also feeling the effects of carrying just one spare tyre for the second pass, Novikov kept local-favourite Pontus Tidemand at bay to maintain his fifth place. Upping the pace whilst keeping his Fiesta RS WRC firmly on the stage, Neuville secured the fifth-fastest time through SS7 – just 2.1 seconds off the time of last year’s winner Jari-Matti Latvala – to secure eighth place overall.

Finding his rhythm, Hänninen retained his seventh place, just 26.1 seconds down on Tidemand whilst, recovering well from his earlier excursion – and adapting to the art of interpreting a Latin as opposed to Cumbrian accent behind the pacenotes – Wilson climbed to 17th position overall.

“We managed to take time out of [Sébastien] Loeb and Jari-Matti [Latvala] all afternoon so I have to be happy with that. Considering all the dramas this morning, fourth is quite a good position for us at the moment, and I hope we can continue to catch the guys in front tomorrow.

“My target is the podium, but [Sébastien] Ogier seems to be going really well. If he doesn’t have any problem, I think he will be difficult to beat now. He has quite a good lead, but we will definitely continue pushing tomorrow.”

“There are a lot of different lines on the stages so it has been tricky to follow the correct lines at times, but everything is fine. We lost a bit of time on the middle stage [SS6] when Dani [Sordo] went off the road and then we didn’t have the best tyre choice for the last stage [SS7]. We only took one spare, and in hindsight it might have been better to go with two.

“But having said that, we didn’t lose too much time and we now have more options for the following days. It’s been a good day with no real dramas, so we will continue to fight like this tomorrow.”

“This afternoon was a bit better than this morning. We took two spares which helped us on the last stage [SS7]. It worked for me and I am feeling a lot more confident with the car. We still have two days to learn and improve on our times, so I am happy.”

“This afternoon has been good. We confirmed the pacenotes in the morning and we tried to drive a little bit faster this afternoon which I think we did quite well. We are getting more and more into the rhythm and things are starting to feel good and coming together nicely.

“”We took one spare and for me I think this was the right decision. There are a lot of factors as to what makes the best option with tyre strategy – it depends on the driver and the road position – and for me it worked well.”

“This afternoon was a little bit better. On the first stage [SS5] we actually ended up being first on the road as [Michał] Kosciuśzko went off so that was fairly tricky! There’s no clear line and you are just constantly aware that you’re making tracks for the cars behind. But the third stage [SS7] was a bit cleaner and I felt a lot better.

“Hopefully tomorrow we should be starting a little further behind on the road which will be a lot better. At the moment, as soon as you go off line there is just no grip whatsoever. The historic cars – who were the last to go through – take a totally different line to what we take so it is really hard to follow. But as I say, things should be better tomorrow and if we have less snow it should makes things a bit easier too.

“I’m working well with Gio [Bernacchini]; it just always takes a little while to get used to a new co-driver. The accent is so different to what I was used to with Scott [Martin]. But it must be even harder for Gio as my notes are the total opposite to Nasser’s [Al-Attiyah] so he’s doing a really good job.”

“Mads’ [Østberg] problems this morning were obviously very disappointing for him and the entire team, but he has fought back admirably and is now within striking distance of at least second place. He and Evgeny [Novikov] have done a great job for the team and are on target to score some good points for the Manufacturer team.

“Thierry [Neuville] too has taken a very good approach to this event – using the first pass to check the pacenotes and then upping the pace over the second loop. His stage win this evening is testament to the mature manner in which he has tackled a surface on which he is not as comfortable as others.

“The fact that we have seven Fords in the top-ten is also very promising. Pontus [Tidemand] especially has been outstanding and I cannot remember the last time a competitor so young made such an impact on their competitive debut at the pinnacle of the sport.”

Citroen's Loeb holds second on leg one of Rally Sweden