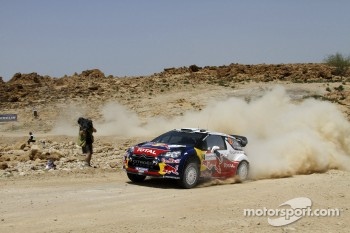 Running fourth on the road, Ogier was perfectly placed to benefit from the drivers ahead sweeping loose gravel from the surface. He was second quickest over the opening stages, which were won by Loeb and Solberg respectively, to take joint lead overall going into the final stage.

Along the morning’s 41.5 kilometre final stage tracing the route of the River Jordan, Ogier beat Solberg by 2.4 seconds and Loeb by 7.4, moving into an overall lead from Solberg of 7.2 seconds.

“Now everybody is pushing from the start,” said Ogier, “because of the delayed start of the rally, so that’s making things interesting. It’s also been an extra challenge to work with the pace notes because we had to do the recce in hire cars rather than the ones we usually use.

“We will try to make a difference this afternoon but it will not be easy.”

Jari-Matti Latvala led the charge for the Ford Abu Dhabi World Rally Team while team-mate Mikko Hirvonen suffered the consequences of running first on the road. Latvala was third fastest in all three opening stages and could even have finished higher in the second one, but he was pushing so hard that he misread a crest and briefly went off the road, hitting a rock. He remains in fourth overall, 2.4 seconds behind Loeb.

We will try to make a difference this afternoon but it will not be easy.

Hirvonen slipped backwards all morning, lamenting the loose gravel on the road surface, and faces a tough afternoon trying to recoup the 51.5 second gap to the leader.

Mads Ostberg completes the top six for the M-Sport Stobart Ford World Rally Team, 3.6 seconds behind Hirvonen. He berated himself for his conservative performance on the opening stage, where he set the ninth fastest time, but going fifth fastest on the following stages brought him back into contention.

Team-mate Henning Solberg was less fortunate. After finishing inside the top ten in the opening stages he hit a rock on the Jordan River stage, damaging the engine. Matthew Wilson brought his Stobart Ford Fiesta RS WRC home undamaged despite running over a large rock on the second stage, moving to seventh overall ahead of Kimi Raikkonen, who had an inconsistent morning in his Citroen DS3 WRC. Raikkonen was quick on the hard-packed first stage but once again struggled on the loose. This is only his second gravel event in the Citroen.

Nasser Al-Attiyah was in impressive form in his Fiesta S2000, not only dominating the SWRC field but also moving into ninth place overall ahead of the Abu Dhabi Fiesta RS WRC of Khalid Al Qassimi. Al-Attiyah started building his advantage on the opening stage and he never relented. Eyvind Brynildsen led the pursuit on the opening stage in his Skoda Fabia S2000, but went off the road and hit a rock on the second stage, terminally damaging his suspension.