Abu Dhabi, UAE - Sheikh Khalid Al Qassimi will be paying close attention to the West Europe weather forecast over the next week in the hope that recent rain clouds roll back to reveal a bright outlook for Rally de Portugal - the next leg of his 2013 World Rally Championship campaign.

The Emirati driver found conditions much to his liking during a full day of testing last week in his Abu Dhabi Citroën Total World Rally Team DS3 WRC, and he is counting on more of the same when the fourth round of this year’s WRC calendar gets under way on 10 April. 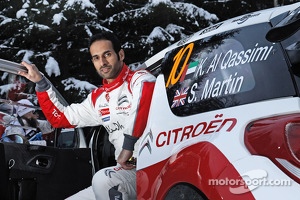 “When I arrived at Portugal it was raining but we had a clear, dry day for testing and everything went well,” said Al Qassimi, who was accompanied by regular British co-driver Scott Martin.

“Since then it has been raining again and, looking at the forecast, it might rain for the next ten days, which could be a problem. If it rains during the rally, we’ll get no benefit from the testing we’ve done.”

Al Qassimi is no stranger to the notoriously abrasive gravel stages of Rally de Portugal, which has a reputation for shredding tyres faster than most WRC events.

“For sure I want to target another top ten finish,” said Al Qassimi, back on the world stage for a nine-event programme this season as a result of the new partnership between Abu Dhabi Racing and eight-time WRC manufacturer winners, Citroën Racing.

“It won’t be easy. I’m still getting to know the car, it’s my first WRC gravel event since 2011 and I was out of rallying for quite a time after that. You have to be realistic but getting into the top ten is what’s in my mind.”

After the rugged desert trails of Qatar, the snow and ice of Sweden and the soft sand stages of Kuwait last week, Al Qassimi is having to make regular adjustments as he switches between the WRC and FIA Middle East Rally Championship.

“It’s always a challenge to adapt from one kind of terrain to another, especially when you go from fast open desert stages like in Kuwait to the narrow roads and very technical stages of Portugal,” he said. “It’s important to hold your concentration and keep your rhythm.”

The Rally de Portugal retains much of its 2012 format, with three days of competitive action taking place in the Algarve and Baixo Alentejo regions. With the recce being held on 9 and 10 April, the Qualifying Stage the following day returns to Vale do Judeu.

Later that day, and for the first time since the event returned to the WRC, the rally features a ceremonial start at Vilamoura Marina, Europe’s largest luxury tourist complex.

Atkinson secures sixth in Mexican round