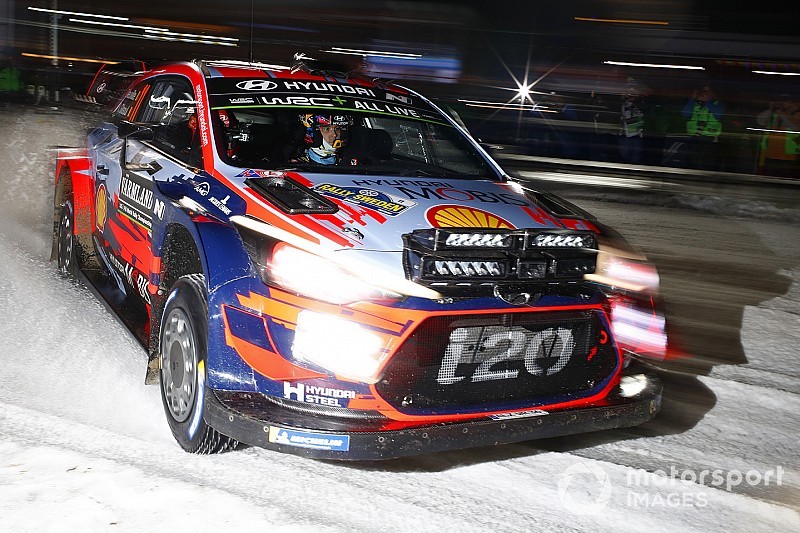 Neuville and Ogier were engaged in a last-gasp battle for victory at Rally Monte Carlo and resumed their fight on Sweden’s 1.2-mile Karlstad superspecial, although the Citroen driver was second fastest after running wide at the final corner.

The wet, slushy snow reduced grip for all the drivers and created deep ruts.

Jari-Matti Latvala confirmed his status as the most experienced WRC driver of all time by officially starting his 197th rally, going fifth quickest and finishing up only 1sec behind teammate Tanak.

Finnish drivers dominated the rest of the top 10, with Teemu Suninen (Ford) and Esapekka Lappi (Citroen) sixth and seventh respectively.

Such was the difficulty of Karlstad’s slippery surface that WRC2 Pro leader Eerik Pietarinen, who was selected as a factory entrant by Skoda for this event, was tied for ninth overall.

He set an identical time to both Kris Meeke – who had a skirmish with a snowbank in his Toyota during shakedown this morning – and former Hyundai junior driver Jari Huttunen, while placing ahead of several WRC contenders.

Elfyn Evans, Pontus Tidemand and Loeb all finished outside of the overall top 10, mixed in with WRC2 contenders.