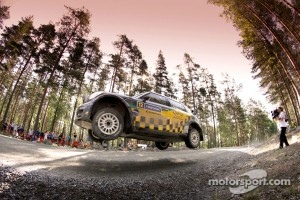 Although the Brazilian had to drop out, he caused a good impression on his first appearance Down Under

Daniel Oliveira and Carlos Magalhaes’s first incursion into Rally Australia didn’t finish as expected. The BWRT crew members had to drop out pretty early of a rally which turned out to be one of the most eventful rallies of the year for the many accidents reported throughout the weekend.

Daniel started the last day of action in a very positive mood after being able to complete all the Saturday’s stages, something that boosted his confidence to face the last six speed tests of this 10th round of the FIA World Rally Championship.

On the opening stage of this final leg SS21 Bucca (14.83km), the Brazilian driver recorded the 13th time overall to beat Ken Block’s Ford Fiesta by 6.2secs. which meant a good start for Daniel’s personal ambitions for this day.

Unfortunately, after passing through the opening split time on SS22 Plum Pudding (30km) Oliveira went off the road and damaged the car in such a way they could not get back to the road.

Daniel couldn’t take a good chance to gain more kilometres and continue improving on his learning curve. He also missed the opportunity to run the Power Stage, where a lot of Aussie fans were expecting to see the driver off which exhibited the only MINI John Cooper Works WRC in the competition.

The MINI JCW caused good sensations amongst the spectators and Daniel is taking with him the support received during the whole weekend on the part of one of the greatest fans all over the world according to his personal experience.

“We had a very short day. The first stage was very good. On the second we cut a bit early a bend and the car slid off the road. We hit a tree and that’s where our rally was over. The important thing is to continue gaining kilometres, even more in a technical and demanding rally like Australia. I believe it had been a difficult rally for most of us. There were a lot of changing situations, rain, mud, and roads which were completely new to me. Now we have to think about our next competitions on tarmac”.

On his next appearance within the WRC Daniel will be returning to the European tarmac to dispute Rally France that will be held in the Alsace region from September 29th to October 2nd. Afterwards, he will compete in Rally Spain again on tarmac.