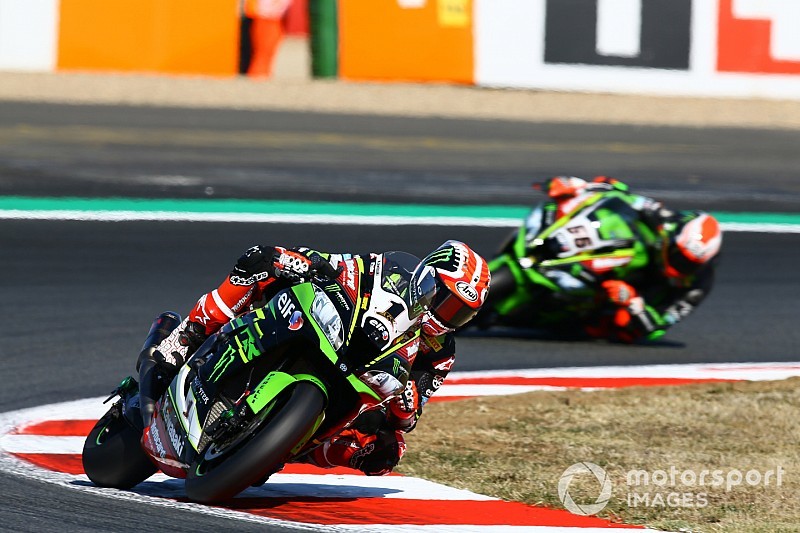 Rea came from the third row to second after just three laps, and engaged Ducati's Davies up until the latter stages before making his decisive move to claim his eighth win in a row.

Davies and Ducati teammate Melandri drew alongside each other on the run into the first turn at the start, with the former getting the upper hand while Yamaha's van der Mark carved around the outside to take second.

Rea moved up from ninth to fourth at the Adelaide hairpin and scythed up the inside of Melandri at Turn 8 to get into the podium places.

Davies opened up an advantage of nearly a second on lap two, while van der Mark was powerless to stop Rea from coming through at Estoril on the following tour.

However, van der Mark was able to pull Rea in along the run to Adelaide, with the Kawasaki rider losing out to the Dutchman and to the flanking Melandri.

Melandri ran on at the Nurburgring chicane, though, and Rea finally made a move stick on van der Mark at Imola for second.

This battle allowed Davies to move 1.5s clear of the field, but Rea in clean air was able to wipe this out within two laps to shadow the Ducati man at the start of the sixth tour.

Rea made his first raid on the lead at Adelaide on lap nine, but Davies retained the position after the Kawasaki rider ran wide. This was repeated three laps later, but Rea got the job done at Turn 8.

Once in front, Rea eased away to secure his 14th win of the year and to tally up his 131st career podium, surpassing the all-time record set by double champion Troy Corser.

Davies held onto second for his first podium since the Misano round, with van der Mark completing the rostrum ahead of the sister KRT machine of Tom Sykes.

Melandri faded from the podium battle late on and was demoted by Tom Sykes to fifth, while poleman Lorenzo Savadori (Milwaukee Aprilia) was sixth ahead of the Yamaha of Alex Lowes, Xavi Fores (Barni Ducati), Leon Camier (Honda) and home hero Loris Baz (Althea BMW).

Guandalini Yamaha's Jakub Smrz crashed out in the closing stages at Estoril, while wildcard Matthieu Lussiana suffered yet another mechanically-induced retirement on his Dreamteamcompany Aprilia.