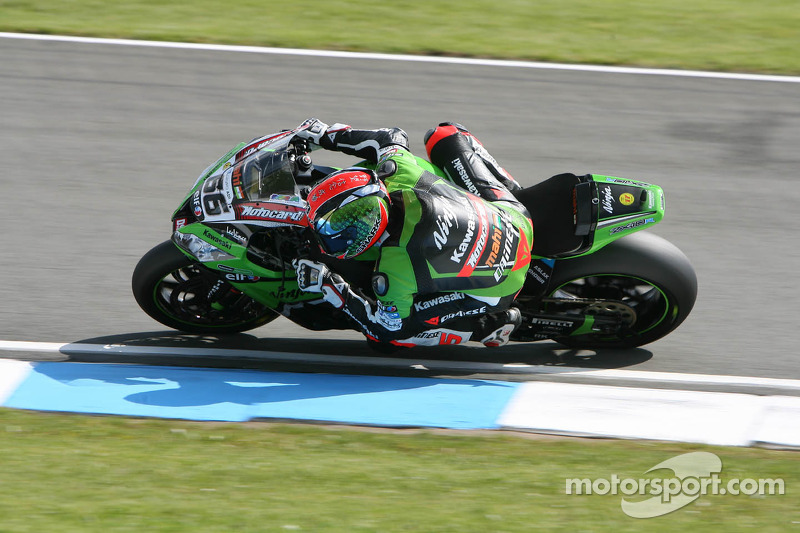 The 28.546 spectators attending Round 5 had a lot to cheer on today as Great Britain had a key-role in today’s races at Donington Park. Tom Sykes (Kawasaki Racing Team) scored an outstanding double-win, his maiden in eni FIM Superbike World Championship, that was icing on the cake of an unbelievable performance by the home rider, who led every single session from Friday’s Qualifying 1 on.

Thanks to his 8th race victory, Sykes lies now 2nd in the championship, only 4 points away from Sylvain Guintoli (Aprilia Racing Team), still Championship leader after today’s two podium finishes. Marco Melandri (BMW Motorrad GoldBet) made his way to 2nd place in Race 1, while Eugene Laverty scored his first ever top-3 finish on the Leicestershire track in Race 2.

The perfect Sunday for UK fans was completed by Sam Lowes’ World Supesport win, the third consecutive for the local boy in 2013. As for Sykes, the Yakhnich Motorsport Yamaha rider has been absolutely unstoppable on his favourite circuit.

Tom Sykes was the winner of Race 1 at Donington Park. The Brit rode a perfect race up front for all the 23 laps, displaying pure class and outstanding race craft, avoiding any risk and at the same time not allowing the following riders to close the gap. Despite a challenging first half of the race, Marco Melandri clawed his way back to 2nd following a successful overtake manoeuvre at the last turn, on lap 16, over third place Sylvain Guintoli.

Following a competitive first part of the race Jonathan Rea (Pata Honda World Superbike), couldn't keep up the pace with Sykes and was forced to ride defensively to a final fourth position. The Ulsterman finished ahead Frenchman Loris Baz (Kawasaki Racing Team) - who had an up and down performance in Race 1 - and Eugene Laverty (Aprilia Racing Team). The works Aprilia rider had a hard time after running off-track during lap 7 at "Fogarty Esses", and continued to struggle as the race went by.

Same type of performance for Chaz Davies (BMW Motorrad GoldBet SBK), able to stay with team mate Melandri in the early stages but finding difficult to push hard later on in the race. An early end of the race for Leon Camier (FIXI Crescent Suzuki), following a crash at "Goddards" on lap 3, while team mate Jules Cluzel ended up 9th in a battle up to the finish line ahead of Michel Fabrizio (Red Devils Roma Aprilia) and Team Ducati Alstare trio of Ayrton Badovini, Carlos Checa and Niccolò Canepa.

After doing his best to line-up his CBR 1000 RR on the grid, Leon Haslam (Pata Honda World Superbike) was forced to withdraw the race due to his fitness conditions.

Tom Sykes' maiden double-win in the series comes after a total domination in Race 2 for the home rider, who continues his charge to the top now just 4 points away - waiting for the final decision by the FIM International Disciplinary Court on Monza Race 2 results. The last time a Kawasaki rider was able to secure both race victories dated back to 2000.

Tom Sykes: “I have been in World Superbike for a few years now and I got the first double win on home soil is a fairy tale. One click on the front suspension between races made the difference and we could see that in the second race time, which was better than the first one. I got the new Best Lap yesterday and I got the new lap record in race two so I have the full set. I really enjoyed the support from the crowd and I hope they enjoyed the show. No better place to do my first double than at Donington Park. We’re in a strong situation, we have a good base setting and now we are going to some fantastic circuits.”

Sykes pulled away from the chasing pack in the early stages and managed a seven seconds lead up to the chequered flag, finishing ahead of works Aprilia duo of Sylvain Guintoli - still Championship leader - and Eugene Laverty. The 26 year old Irishman, at his first rostrum finish on the Leicester track, had to defend his position from a late charge by Marco Melandri, who ran off track at "Fogarty Esses" following a final attempt of edging out the opponent from 3rd place.

Eugene Laverty: “At the end of Race 1 I was disappointed. I have always had some hard time on this track, but I could have done better than seventh place. On the other hand Race 2 got off to a better start straight away. A few changes we made to my RSV4 between the two races immediately increased my feeling with it. In fact, I was able to defend third place against Melandri's attacks, and as I said at Monza, it's always nice to end the weekend with a podium. The performance in Race 2 is encouraging for the rest of the championship. It shows that even on shorter, more winding tracks we can keep up with the top riders.”

Melandri quickly rejoined to end up 5th behind the competitive Davide Giugliano, who looked at times in the position to have a shot at the top-3 he's missing from June 2012. Slight improvement for official BMW rider Chaz Davies, 6th at the flag ahead of Frenchman Loris Baz.

A 4-way battle for 7th saw Niccolò Canepa having the better of Jules Cluzel, Michel Fabrizio and Jonathan Rea. The One Event rider for the round waved Team Ducati Alstare's flag high after Checa's withdrawal from Race 2 (left shoulder issues) and Ayrton Badovini's crash at Turn 2 on lap 19. The "nightmare weekend" of Leon Camier was completed by another low-speed crash at Turn 12, with the Englishman able to get back on track for a final 13th place.

An uncatchable Sam Lowes has won by domination the World Supersport race today at Donington Park. The local rider has put up a supreme performance to finish with an 11 seconds margin over 2nd place Kenan Sofuoglu (Mahi Racing Team India Kawasaki) and delighted the crowd with a spectacular wheelie over the finish line.

Lowes lapped consistently within the 1'31 seconds bracket throughout all the 23 laps - except the final one. Sofuoglu, meanwhile, had to face some tough challenge to get in 2nd place but once he did, the defending Champion could easily pull away for a lonely ride to the chequered flag. The Turkish rider was also involved in a collision with Christian Iddon early in the race at "Melbourne" hairpin (Lap 2) that forced him to run wide and lose some ground.

Roberto Rolfo (Parkingo MV Agusta Corse) scored a sensational 3rd for the Italian brand, that was last seen on a World Championship podium in 1976: at that time Giacomo Agostini was the winner of the 500cc race at Nurburgring. Rolfo put up an outstanding recover from th 15th slot on the grid to give Giuliano Rovelli's squad the first rostrum finish in Supersport since Portimao 2011.

Fourth place for Lorenzo Zanetti (Pata Honda World Supersport) ahead of fellow Italian Luca Scassa (Intermoto Ponyexpres Kawasaki). The two riders battled out in the final lap with the Honda rider able to overtake the former Italian Superbike Champion at the chicane to eventually defend his position up to the flag, despite a fantastic last-turn attempt by Scassa.

The rider from Tuscay had, earlier in the race, a collision at the exit of "Goddards" with team mate Florian Marino, after which the Frenchman crashed out finishing on a bad note a promising race. 6th place for Jack Kennedy (Rivamoto Honda), ahead of Sheridan Morais (PTR Honda) and Andrea Antonelli (Team Goeleven Kawasaki).

Lowes dominates Donington with the Yamaha

Ryan Newman: 'I had given you pretty much the same answers the last 10 years'