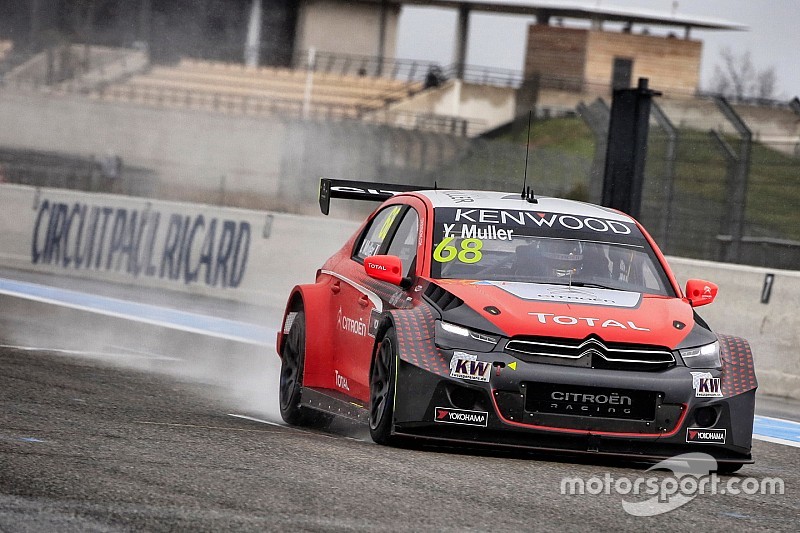 Citroen Racing’s Yvan Muller has slammed the new increase in compensation weight for the WTCC to 80 kilograms as “a stupid decision”.

The Frenchman voiced concerns over safety during races which will be heavier on the brakes and throughout the summer in hotter conditions.

Citroen still took pole position for the Paul Ricard season opener, with Jose Maria Lopez winning the main race just ahead of Honda's Tiago Monteiro, who had closed right up to the Argentinian at the finish after initially being held back by Muller.

Muller's first race was ruined following a penalty for a jump start, while he was knocked down to fourth by the two Hondas of Monteiro and Norbert Michelisz in the second race - something he didn’t find surprising considering the ballast the C-Elysee WTCC is carrying.

“The problem with the 80kg is with safety,” said Muller. “We’re struggling at the end of the races with the brakes, and [at the moment] it’s not warm, so what will happen at a circuit when it’s hard for the brakes? It could be an issue.”

The four-time champion also said Citroen challenged the organisers over the winter about the new weight increase, the heaviest weight handicap in the WTCC’s history, which was only up to 40kg in the championship’s early years with the earlier and heavier TC2 class cars.

“Citroen have fought during the winter to say 80kg is too much, it’s dangerous, and [to the other manufacturers] don’t forget that can be you one day after two or three races.

"We said it’s too risky, it’s a stupid decision, but it’s like this.”

With Citroen carrying 80kg again this weekend at Slovakia while Chevrolet, Honda, Lada and Volvo all remain ballast-free for one more race, Muller says it won’t be until the following weekend until the real performance of the teams will be seen.

“We have to see after Slovakia,” he said. “The real start of the season will be in Budapest… we have 80kg at the moment so we’re not playing with the same tools as the others.”

Jose Maria Lopez: Honda will be a tough year-long opponent

Nika Racing to miss WTCC round in Slovakia