Lots of storylines heading into the ALMS event at Lime Rock Park after the June break.

Dyson Racing calls Lime Rock Park its home track, with the team based in nearby Poughkeepsie, N.Y. However, P1 class challenger Muscle Milk Pickett Racing has felt very much at home at the 1.5 mile circuit in Lakeville, Conn. in recent years, winning the last two races and three of the last four.

The team looks to continue that momentum in Saturday’s American Le Mans Northeast Grand Prix, Round 4 of the 2013 American Le Mans Series presented by Tequila Patrón. Klaus Graf and Lucas Luhr carry a two-race winning streak in the No. 6 Muscle Milk HPD ARX-03c, winning at Long Beach and Mazda Raceway Laguna Seca. Luhr’s two 2013 victories have increased his series-leading total to 43. He has five career championships in three different classes, including the 2012 P2 title with Graf. 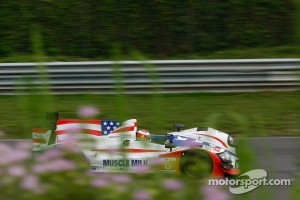 Graf and Luhr teamed to win the 2012 Lime Rock event, covering 168 laps and winning by 12.392 seconds over Dyson Racing’s Chris Dyson and Guy Smith. Muscle Milk Pickett Racing and Dyson Racing will be challenged in the P1 class in the American Le Mans Northeast Grand Prix by Katherine Legge and Andy Meyrick in the first race for the No. 0 DeltaWing LM12 at Lime Rock. While both drivers have experience in the revolutionary prototype, this will be their first race at Lime Rock. The team plans to run six ALMS races between now and the season-ending Petit Le Mans powered by Mazda at Road Atlanta in October.

This weekend is more than a homecoming for Dyson Racing, based less than one hour from Lime Rock Park. The team will celebrate a milestone, marking its 30th anniversary of professional competition when it competes in the Northeast Grand Prix at the track where it all began.

Poughkeepsie businessman Rob Dyson raced a Pontiac Firebird in the 1983 IMSA Camel GT race on Memorial Day weekend at Lime Rock. Of the 37 teams on the grid for that race, Dyson Racing is the lone team still competing today. 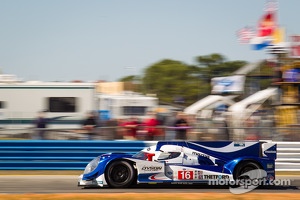 Lime Rock was also where the racing world first took notice of the young team. Dyson and Drake Olson rolled out a new Porsche 962 and shocked the IMSA Camel GTP competitors by winning the first time out. One year later, the team won its first pole – again at Lime Rock – but by then, the competition was accustomed to seeing the orange, yellow and white Pat Smith-prepared No. 16 Porsche running up front.

Over the years, Dyson Racing kept up with the times. Winning 12 races and scoring 32 podiums against the factory teams during the golden years of GTP racing, the team graduated from the Porsche 962 to a Ford-powered Riley and Scott to win 36 races over eight years and several championships. The team then raced AER-powered Lolas, Porsche RS Spyders and partnered with Mazda, giving the marque its first P2 victory at Lime Rock in 2009. Dyson Racing’s accolades include 19 championships, 70 victories, 68 poles and 208 podiums. Competitors and fans will toast and roast Rob Dyson and his team’s three decades of racing on Friday evening at a combination fan forum and roast at the Harpoon Tavern Tent on the hillside overlooking the Esses.

But it was anything but a layoff for Bill Auberlen and Patrick Long, who were in action during all five weekends in June – crossing the Atlantic Ocean four times in the process. The Lime Rock event will be the sixth straight weekend behind the wheel for both drivers. Auberlen joins Maxime Martin in the No. 55 BMW Team RLL/Crowne Plaza BMW Z4 GTE, while Long is partnered with Tom Kimber-Smith in the No. 06 CORE autosport Composite Resources Porsche 911 GT3 RSR.

It was a quick turnaround to travel to France, where both drivers spent the following weekend at Circuit de la Sarthe testing with their respective teams for the 24 Hours of Le Mans.

Then it was on to the Mid-Ohio Sports Car Course Auberlen and Dalla Lana won class honors in the Rolex Series and second overall in the Continental Tire Sports Car Challenge, sharing BMW M3s for Turner Motorsport. Long narrowly missed the Rolex Series podium with a fourth-place finish.

On to France. It was another near-podium for Long, who finished fourth in LM GTE Am with Patrick Dempsey and Joe Foster. It was a short day, though, for Auberlen, who went out early with Dalla Lana and Pedro Lamy in a factory Aston Martin Vantage V8 in the LM GTE Pro class.

From there, it was back to the USA and Watkins Glen, N.Y., for last Sunday’s Sahlen’s Six Hours of The Glen. Auberlen, Dalla Lana and Billy Johnson finished fourth in GT, after finishing 13th in Saturday’s Continental Tire Sports Car Challenge race. Long took eighth in GT with Lindsey and Bryan Sellers.

Lime Rock Park will be a homecoming for a number of ALMS participants.

Scott Sharp grew up in Norwalk – directly south of the circuit – and tuned his racing chops at Lime Rock under the guidance of his father – multi-time SCCA national champion Bob Sharp – and drivers including Paul Newman and Jim Fitzgerald. 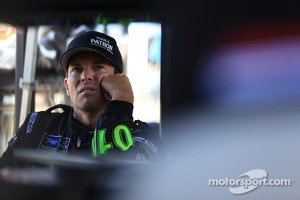 Having since relocated to South Florida, Sharp will have plenty of local support when he co-drives the No. 01 Extreme Speed Motorsports Tequila Patrón HPD ARX-03b with Guy Cosmo.

Lime Rock is close to home for Chris Dyson, who was born in Poughkeepsie, N.Y. and now lives nearby in Pleasant Valley, less than an hour west of the circuit. He began his racing career at Lime Rock at age 17 and scored his earliest SCCA victories at the circuit. More recently, the Dyson Racing sporting director captured the P1 pole in 2011 and joined Guy Smith in scoring a dominant victory, leading 165 and the 187 laps.

Bill Sweedler of Westport is the only ALMS driver currently living in the Constitution State. He co-drives the No. 23 Team West/Alex Job Racing/Boardwalk Ferrari F458 Italia with Townsend Bell.

“I’m excited to be racing in my backyard again,” Sweedler said. “It’s always nice to be racing in front of the home crowd. Racing at Lime Rock is like being in an MMA cage fight. The team has put a lot of work into the Ferrari since Laguna and I’m ready to take it around that tight Lime Rock bullring.”

A number of other ALMS regulars are returning to their Northeast roots, including Long Island natives Cosmo and Andy Lally, and New Jersey’s Bryce Miller.

“I took my first driving school at Lime Rock 20 years ago last month,” Lally said. “This will be the first race track that I will go to for the 20th straight year.”

Knocking On The Door: Dempsey Del Piero Racing On Cusp Of Breakthrough Victory

Riding a wave of momentum following a fourth-place finish in the 24 Hours of Le Mans, Dempsey Del Piero Racing could be on the doorstep of its breakthrough first victory in the ALMS.

The team finished second in the most recent ALMS race at Mazda Raceway Laguna Seca, where Patrick Dempsey and Andy Lally’s No. 27 Tully’s Coffee Porsche 911 GT3 Cup lost the lead to Henrique Cisneros and Nick Tandy on the final lap.

Then, it was on to the 24 Hours of Le Mans, where Dempsey and Patrick Long each led the race twice while Joe Foster ran in the top three en route to a fourth-place finish in the LM GTE Am class.

“We came so close in our last race together,” Lally said. “We dominated the last part of Laguna Seca, and led so many laps but had something really crazy happen at the final green/checker restart after having a pretty commanding lead. We’re coming off the team’s best finish in the ALMS, and looking forward to getting one step higher at Lime Rock and taking the win.”

The return of Dempsey and his team to Le Mans is also being featured in a four-part miniseries premiering Wednesday, August 28 at 10 p.m. (ET/PT) on the Velocity network in the United States.

Two years in the making, “Patrick Dempsey: Racing Le Mans” focuses on Dempsey taking his place alongside other iconic Hollywood race car drivers like Steve McQueen, Paul Newman and James Garner as well as the team’s tireless efforts on and off the track in preparing for the return to Le Mans.

Corvette, Viper Among Teams Returning To ALMS After Racing At Le Mans

Corvette Racing and SRT Motorsports return to the ALMS two weeks after competing in the prestigious 24 Hours of Le Mans. 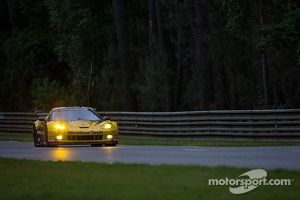 After finishing fourth and seventh in the world’s premier sports car race, Corvette Racing returns to defend its GT driver, team and manufacturer championships. Corvette has four victories at Lime Rock, but none since 2008.

“At three hours, it seems you run as many laps at Lime Rock as you do at Le Mans because it’s so short,” said Antonio Garcia, who co-drives the No. 3 Compuware Corvette C6 ZR1 with Jan Magnussen. The two finished fourth at Le Mans. “You really need to be accurate with your strategy, because you can get caught there. But I’m on the best team to do that, coming off our victory at Laguna Seca. But I’m sure all 11 cars will be right on from lap one.”

Oliver Gavin and Tommy Milner share the team’s No. 4 Compuware Corvette C6 ZR1 entry. Coming off a seventh-place finish at Le Mans, they are three points out of the GT points lead.

Dominik Farnbacher and Mark Goossens led the SRT efforts at Le Mans with an eighth-place finish. They will co-drive the team’s No. 91 Viper GTS-R at Lime Rock, with Kuno Wittmer and Jonathan Bomarito in the No. 93 Pennzoil Ultra entry.

Fielding a single car at Le Mans, Level 5 Motorsports returns to two Siemens/Alpina Watches/Ohiya Casino Resort HPD ARX-03bs in the P2 class with its three Le Mans drivers. Team owner Scott Tucker will drive both cars, joining Marino Franchitti in the No. 551 and Ryan Briscoe in the No. 552.

Patrick Dempsey and Le Mans co-driver Patrick Long will drive for different teams at Lime Rock after finishing fourth in the French classic. Dempsey will co-drive with Andy Lally in the No. 27 Dempsey Del Piero Tully’s Coffee Porsche 911 GT3 Cup. Long returns to the No. 06 CORE autosport Composite Resources Porsche 911 GT3 RSR, where he joins Tom Kimber-Smith, who drove for Greaves Motorsport at Le Mans.

Jeroen Bleekemolen and Cooper MacNeil, co-drivers of Alex Job Racing’s WeatherTech Porsche, drove in two different cars at Le Mans. While they missed the podium at Le Mans, Bleekemolen did win the Nurburgring 24 Hours in May.

Also in different cars at Le Mans were Bill Auberlen and Maxime Martin, who drive the No, 55 BMW Team RLL Z4 GTE.