Puma 3 M-Sport will make their debut in the series with the support of Eurotech and will be lining-up an all-Italian duo.

The Puma 3 M-Sport team is gearing-up for the 2014 Auto GP season and is ready to field two top-class racers. The Spanish squad, owned by Jaime Pintanel and Sergio Rinland will make their debut in the series with the support of Eurotech and will be lining-up an all-Italian duo consisting of Kevin Giovesi and Loris Spinelli.

Giovesi, who scored excellent results in the Italian F.3 Series before winning the 2012 Formula 3 Open Copa class, made his Auto GP debut during the last season. He entered ten races, ending up with five podium finishes and one fastest lap. He had joined Puma 3 M-Sport by Eurotech in postseason testing at Vallelunga. 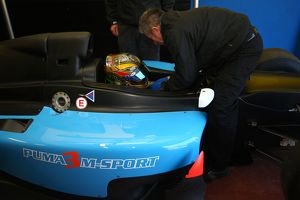 Puma 3 M-Sport team
His team-mate Spinelli has won the 2011 KF2 World Championship and the 2012 Margutti trophy in KF3 in 2011. The 18-year-old from Pescara will be at his first experience on a 550-horsepower car and is set to get his first grip with the bigger formulas in the upcoming Jerez test. Despite having only entered three races with open-wheel cars, he has already recorded one podium finish and is definitely one of the most interesting young prospects of Auto GP.

Kevin Giovesi: "I'm happy and proud to be back at the start of the Auto GP championship. This season I will be starting the series from the first race, and with a new team. For the pace I showed last year, I'm looking forward to be a contender. The Valencia test will be very important to understand where we are compared to our rivals and to prepare well for Round 1 at Marrakech".

Loris Spinelli: “I'm excited for having reached this deal for a ride in the 2014 Auto GP series. I want to thank my family for supporting me up to this point, and the team as they'll be helping me to grow up throughout the season. Moving from karts to Auto GP won't be easy, but I'm very motivated. I want to give 100% and collect some positive results".