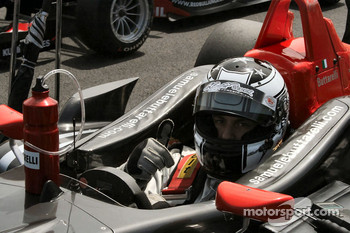 Auto GP keeps attracting young talents as the grid is filling-up quickly: 18 years-old Samuele Buttarelli reached an agreement with Ombra Racing and will take the wheel of one of the cars prepared by the Italian team to contest the 2011 season, joining the already confirmed Kevin Ceccon. For the team managed by Massimo Pollini it's an high profile choice, as Buttarelli is considered one of the most gifted italian young guns, and has been drawing the attention of talent scouts throughout the last seasons. Thanks to both quickness and good race management he was one of the key players in the 2010 Italian F3 Championship clinching 4 podium finishes, and despite his young age he showed also a great versatility, racing and winning in the Endurance races of Formula Le Mans. So, he will be among the ones to watch, especially for the Under 21 classification, the newly created trophy that will award a prize GP2 test to the winner.

Enzo Coloni: "I'm really happy to see that all the best young talents from Italian motorsport did choose Auto GP. It's for drivers like them that I decided to create the Under 21 Trophy, and I'm happy that people is getting the message and is understanding the huge potential of Auto GP as a tool to prepare a driver for GP2 and even F1. Samuele is another great addition to our grid and given the quality of the drivers we have, I expect the fight for the Under 21 classification to be very tight right from the beginning".

Massimo Pollini: "We're thrilled to have Samuele with us. He showed an amazing growth in the last two seasons, confirming himself as one of the benchmarks in Italian F3. We're happy that we'll be able to work with him in this new step of his career, and we're also very excited looking at the start of the season with such a young line-up. It's a challenge the team is looking forward to, and I'm sure that mixing the enthusiasm and the talent those guys bring with them with our experience will be the right formula to clinch great results".

Samuele Buttarelli: "I really look forward to testing the car, as a lot of people told me it's great. Auto GP will be a great challenge as I will have a lot of tasks: learning a new car, knowing a new team and their working method, and I will have to cope with situations I never met before, like pit-stops. I want to make the most of the Barcelona test so that I will be ready for the start of the season, as I have very high ambitions: I want to win right from the start, aiming to both the overall and the Under 21 classifications. Competition will be tough, but this means only that I'll be even more focused".