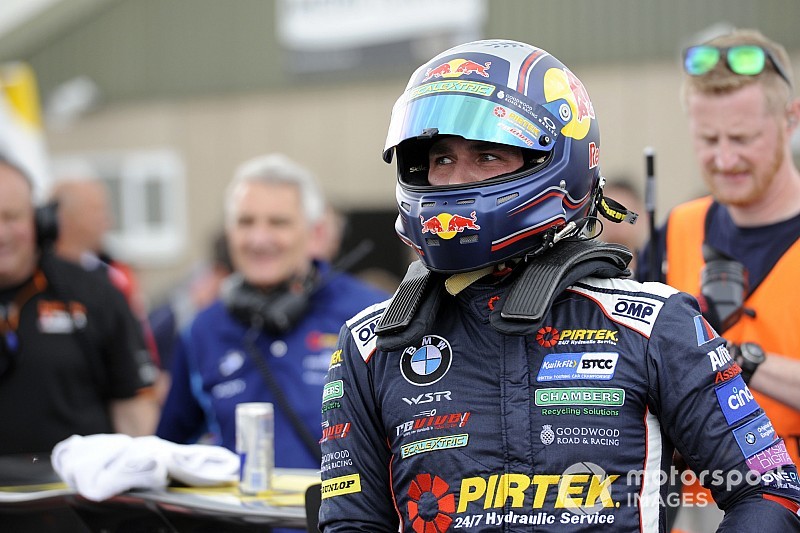 WSR driver Andrew Jordan wrapped up his second BTCC victory of the day at Croft, leading teammate Colin Turkington for a BMW 1-2.

Ahead of the fourth round of the season, the new-for-2019 BMW was given a minor reduction to its engine boost at the cost of 4bhp, but Jordan and Turkington remained dominant up front.

Polesitter Jordan retained first place off the line, despite being laden with the maximum 54kg of success ballast for his race one success.

Second-starting Smiley covered off the threat of Tom Chilton, which allowed Turkington up into third place.

The third BMW of Tom Oliphant tried to follow suit, but he tangled with the Motorbase Ford of Chilton and spun at the exit of chicane.

Oliphant was fortune not to be collected as he lay prone but the delay to Chilton – who was drawn on pole for the partially-reversed grid race three – boosted Dan Cammish up to fourth.

BTC Racing driver Smiley struggled with the 48kg of ballast aboard his Honda, and held up Turkington and Cammish, allowing Jordan to swiftly establish a four-second advantage by just lap five of 15.

As Jordan pulled away, Turkington seized his chance to follow suit and deprived Smiley of second around the outside of the Jim Clark Esses.

With clear air, Turkington immediately ran clear of the pursuing train and set the fastest first and second sectors to tear a second out of Jordan’s cushion.

Although Turkington continued to close to 1.1s, Jordan remained steadfast up top to earn his sixth victory of the season and his second brace of BTCC wins in as many meetings.

It also promotes 2013 champion Jordan up to fourth in the points, having started the day just ninth after his huge Donington Park shunt, which meant he failed to score in the three races of round two.

Turkington was followed by Cammish 10s further back, with his teammate Neal in fourth having made an incisive move on Jason Plato under braking for Sunny.

Subaru driver Ashley Sutton claimed a last-lap fifth as an ever-slowing Smiley spun through the Complex.

At the start of the lap, Sutton had clattered the kerb to unsettle his car and it looked as though Smiley would limit the damage to his race and hold on, but he left the door open for Sutton.

The 2017 champion ran the nose of his Team BMR car alongside but Smiley closed the gap and spun across the front.

That promoted the Vauxhall of Jason Plato to sixth, ahead of the Toyota of Tom Ingram and Smiley’s teammate Josh Cook.

Chilton recovered from his early excursion up to ninth ahead of the Mercedes duo of Aidan Moffat and Adam Morgan.