Sainz trailed fellow X-Raid MINI driver Stephane Peterhansel by 1m09s through the first part of the special, before overturning that deficit to a 58-second advantage through the second timed section of the day.

Al-Attiyah sat over three minutes behind Sainz at this stage, but a rapid charge through the final 72km saw him provisionally take stage victory by 26 seconds over Sainz.

However, following complaints from several co-drivers about navigational systems malfunctioning at the final waypoint, FIA decided that the results will be declared based on the order 5km from the finish line.

That meant that Sainz jumped back ahead of Al-Attiyah leading the Qatari driver by just 29s in the final stage classifications. Peterhansel finished another five seconds behind in third, while Toyota’s Giniel de Villiers made it four drivers within a minute of each other.

In the overall standings, Al-Attiyah holds a handsome 17m21s lead over de Villiers heading into the penultimate stage on Tuesday, with Peterhansel in close pursuit in the other MINI entry.

Sainz jumped up to fourth in the order following today's win, but still trails Al-Attiyah by over 30 minutes with two stages to run. 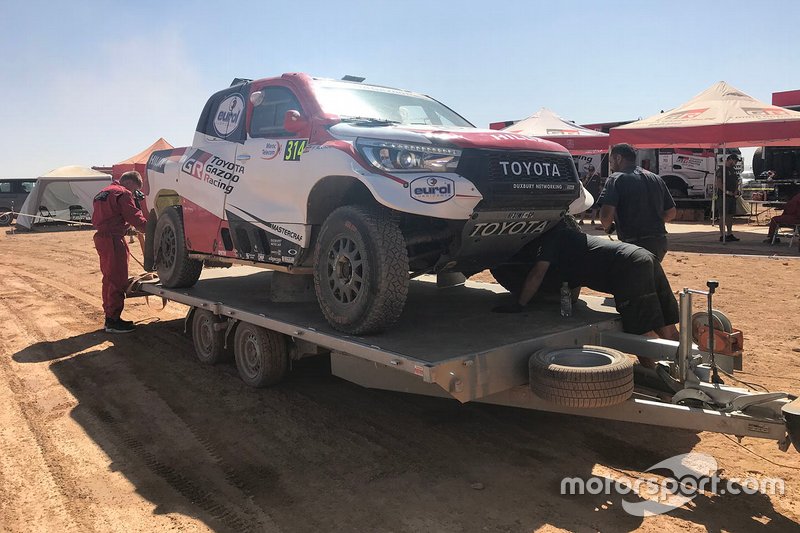 As reported earlier, two-time Formula 1 world champion Fernando Alonso retired from the stage after hitting a ditch that was not marked in the roadbook and breaking the suspension of his Toyota Hilux.

The Spaniard, who is making his first appearance in a cross-country rally, is expected to return in Stage 4 on Tuesday.

“There was a large ditch, which seemed to be made by an excavator recently, near the end of the first part of the stage, at km 75, five kilometers away the finish,” Alonso explained.

“We damaged the suspension and the car. We couldn't repair it unfortunately and we had to come back. I hope that the boys can repair it and be able to leave tomorrow.

"It was not marked in the roadbook. We jumped, we hit hard, but sometimes it goes well and sometimes badly.

“When we landed we stopped and checked the car, but when we started to disassemble the wheel, the car that came from behind gave three roll ups.

"From there we went running to close that area a little so that nobody would pass through there and there would be no more mishaps. A little upset because we wanted a day without problems".

"This is how things are in this discipline, it seems, but it is somewhat disappointing that it was not in the road book, at least. Having three cars eliminated within the top 10 is a very high percentage with or without experience".

Meanwhile, KTM’s Toby Price moved into the lead of the bikes category by winning the third stage of the rally.

Price was aided by a troubled day for overnight leader Joan Barreda (Honda), who lost time with a damaged tyre and slipped to sixth in the overall classifications.