Mitsubishi strong, but not unbeatable for Dakar

Mitsubishi will be gunning for a fifth straight victory in the car division of the 2005 Dakar Rally, and the tenth in the history of the most famous cross-country rally of all. And the Japanese team has pulled out all the stops in the pursuit of ...

Mitsubishi will be gunning for a fifth straight victory in the car division of the 2005 Dakar Rally, and the tenth in the history of the most famous cross-country rally of all. And the Japanese team has pulled out all the stops in the pursuit of that goal, signing up an all-star cast of drivers to pilot the Mitsubishi Pajero Evos. 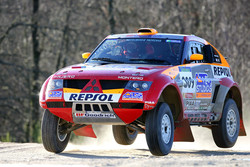 Mitsubishi Motors Repsol ATS Studios shakedown: Hiroshi Masuoka and Andreas Schulz.
Photo by Mitsubishi Motors Corporation.
Leading the charge will be defending champion Stephane Peterhansel, a seven-time Dakar winner -- six times on a bike, and in 2004 in a Pajero -- and the first man since Hubert Auriol to win both on a bike and in a car.

"We have carried out a lot of testing with the car since the last Dakar Rally," Peterhansel explained the work done by the factory. "I won both the Tunisia and Morocco rallies with the Pajero Evo MPR10 and we were delighted with the performance of the MPR11 during the UAE Desert Challenge."

Peterhansel's chief rival within the team may be Hiroshi Masuoka, a two-time winner himself, having claimed victory for Mitsubishi in 2002 and 2003. Joan "Nani" Roma, the 2004 bikes winner, moving over to cars in Peterhansel's footsteps, and Luc Alphand -- moving over from BMW -- will pilot the other two Pajeros.

Andrea Mayer fills out the team in the sole Mitsubishi L200 pickup.

Jean-Louis Schlesser has entered two custom-built Schlesser-Ford buggies with Gauloises, the team that helped him win two Dakar races in 1999 and 2000, before the latest Mitsubish resurgence. Third in last year's race behind Peterhansel and Masuoka, he is joined again by Josep Maria Servia, a longtime Schlesser pilot with six Dakars under his belt and a best finish of fourth overall. 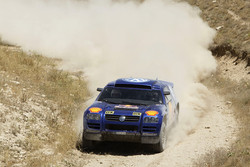 Volkswagen test in Turkey: Juha Kankkunen and Juha Repo.
Photo by Volkswagen Motorsport.
Rivaling the Mitsubishi crew's star power, Volkswagen is back with a vengeance. After a recon year with the Tarek buggy in 2003 and an initial foray in 2004, the factory team returns with the pairing of Jutta Kleinschmidt and Bruno Saby, winners of the 2001 and 1993 Dakar Rallies, respectively.

But the German team was not content with a two-car effort in the face of the rigors of Dakar, and has added four-time World Rally Championship title winner Juha Kankkunen and six-time SCORE off-road champion Robby Gordon. Kankkunen finished fourth in his debut in the Race-Touareg in the UAE Desert Challenge in October, and Gordon has two Baja 1000 wins to his credit, so the two will definitely add strength to VW's line-up.

"Excellent endurance qualities are a necessity," Gordon explained after testing with the team. "The car must be 100 per cent reliable and the driver and co-driver have to fend for themselves."

BMW returns to Dakar for the third time with X5, run by the Quandt family's X-raid team. With the departure of Alphand, who finished fourth for BMW in 2004, the team has signed Jose Luis Monterde and Nasser Saleh Al-Attiyah as the pilots. With Monterede's experience hopefully complementing Al-Attiyah's youth, the team is hoping for a strong finish. 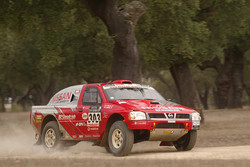 Nissan Rally Raid Team test the Nissan Pickup 2005 at the Baja Portalegre: Colin McRae and Tina Thorner.
Photo by Nissan Rally Raid Team.
"This will be our third Dakar for the BMW X5 and we are absolutely confident that we are well prepared and able to fight for a top position," saidteam principal Sven Quandt. "But with twenty factory or semi-factory cars it will be not easy for us this year."

Nissan is not one to be left behind, and has entered Colin McRae, Ari Vatanen and Giniel de Villiers in Nissan pickups. Vatanen's record is gloried, with a WRC title to his credit, followed by no fewer than four Dakar victories with Peugeot and Citroen. Vatanen, who is now a member of the European Parliament, was lured back to the desert by Nissan in 2003, with an immediate seventh place to his credit.

McRae, the 1995 WRC champion, returns for his second Dakar with Nissan, and De Villiers, a South African touring cars veteran, will be looking to improve on the 5th- and 7th-place finishes in the 2003 and 2004 Dakars. 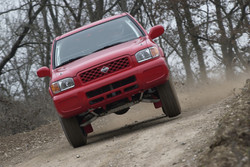 With 167 cars entered, and more than 20 top-notch crews and cars leading the field, the result is certainly not certain. Mitsubishi may be the favorite, but the fight with the competitors -- and the desert -- will be long and hard before the winner reaches the goal of Dakar.