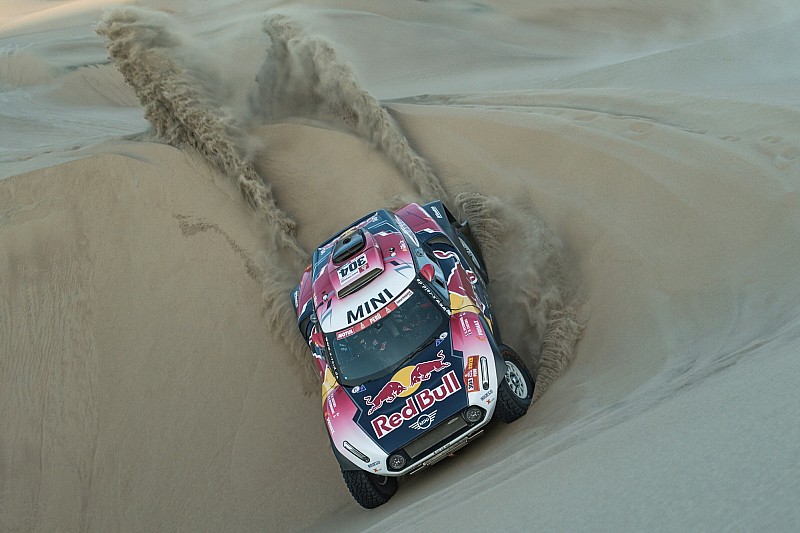 Peterhansel was left stranded on a dune after being distracted by electrical gremlins that affected his Mini Buggy's intercom and air-conditioning. The costly stoppage dumped him to 13th in the overall standings with a 13m55s gap to leader Giniel de Villiers.

While disappointed with the mistake, Peterhansel says it would have been significantly worse had teammate Cyril Despres not intervened, help from his fellow Frenchman limiting the damage in terms of time loss.

"We got caught in a dune, very, very deep and I think that if Cyril hadn't come to help us, maybe we would still be there," Peterhansel said.

"We were a little distracted by some electric problems with the helmets, the air-conditioning, a few things that didn't work anymore in the car. Maybe I was a little less concentrated on the driving while trying to repair these problems, and I was caught by this dune [being] a little soft.

"We stayed there a lot of time. It was in the dunes descending towards sea level, which are generally very soft. It was a rookie error."

Peterhansel added that, stoppage aside, he was happy with the car performance, particularly as he was able to reel stage winner Sebastien Loeb back in.

"In fact the performance of the car was good," he said. "I was pleased with the engine, the chassis, but unfortunately we were caught [out].

"When we restarted, Sebastien was five or six minutes ahead of us and we caught him at the end, so the speed is there.

"It's a shame as it was a good occasion. We started seventh this morning, we went well, there was no bikes around us, we knew that it would not be easy for the guys ahead on the road with the navigation.

"But it's not so bad, thinking of when we were in this dune. Last year, we were leading by 30 minutes after the Peruvian stages, so we can come back.

"It not very good to lose time so quickly, but it's not finished yet."

Despres, meanwhile, added that he had no problem stopping to help Peterhansel, even if it cost him a few minutes of his own.

"Everything was fine until we found Stephane on a small dune," he told Motorsport.com.

"We stopped a few minutes to help him get out of the sand. This is normal for me, because if the team has been good in recent years, it is because there is a very, very good team spirit.

"I do not know how much we have lost, but the most important thing is that we were in the rhythm of the [pacesetters]. We can say that we are happy with the day."

Despres sits ninth in the standings following the second stage.