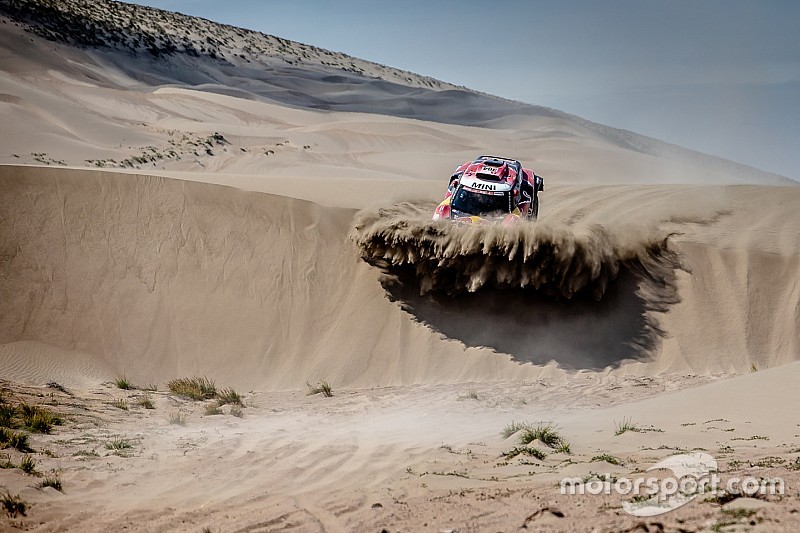 Stephane Peterhansel was left seeing stars after a nasty landing early in the seventh stage of the 2019 Dakar Rally.

The Mini driver made decent headway on leader Nasser Al-Attiyah by winning today's stage, as he moved back into second outright thanks to problems for Sebastian Loeb.

However it wasn't a painless day for the 13-time Dakar winner, a nasty landing off a dune early in the stage leaving he and co-driver David Castera rattled.

Peterhansel later confirmed to the official Dakar website that he suffered "a bad case of whiplash", and elaborated on the scare to media on the ground.

"Not a perfect day," he said. "At the beginning we jumped a dune, it was a big step. We landed on the front and destroyed the bonnet and a little bit our necks as well.

"I saw some stars in my eyes after the big impact."

Stars aside, Peterhansel said he was happy enough to end the stage more than four minutes faster than Mini teammate Nani Roma.

But he still reckons running down the 25 minutes needed to overhaul Al-Attiyah will be a stretch, despite a 15-minute swing over today's stage alone.

"Navigating was tricky, but I think we did well because we gained time on everyone," he said.

"We got a bit closer to Nasser, but it'll be very hard to wrest the lead from him.

"Actually, we don't deserve to be ahead of him because he's doing really well and has made no mistakes so far."

Peterhansel has twice lost 20 minutes plus through mistakes on this Dakar, first with a self-confessed "rookie error" early on, followed by a costly attempt to recover Roma during Stage 6.