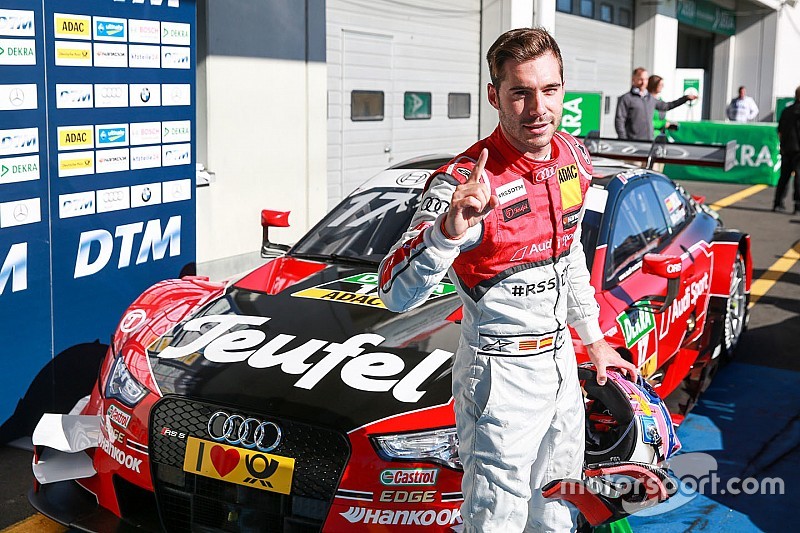 Molina, who has been racing in DTM since 2010, has previously failed to convert pole into victory on four occasions, but finally managed to do so on his fifth attempt.

The Spaniard was ahead at the start and built a gap early on to take the flag 7.5 seconds clear of former DTM champion Paul di Resta (Mercedes) in second. BMW driver Bruno Spengler completed the podium.

But the fight for the 2015 DTM crown will only be decided at Hockenheim in three weeks' time, even despite the fact Wehrlein's main competitors Mattias Ekstrom (Audi) and Edoardo Mortara (Audi) failed to score points.

The story of the race

Audi's Jamie Green stalled on the grid at the start and the drivers behind him had to take avoiding action as the Briton slipped to dead last.

On the run-up to the first corner, Mercedes driver Robert Wickens hit Timo Scheider under braking, spinning his Audi rival into the gravel trap and effectively ending his race, with race control deciding the clash was a racing incident.

The safety car was brought out to help the marshals clear the track and racing soon resumed, with Molina in the lead in front of Blomqvist and di Resta.

On lap nine, di Resta overtook Blomqvist at Turn 1 to take second behind Molina, who had already opened a gap with several fastest laps in a row. One lap later, Spengler went past his BMW team mate Blomqvist as well.

Lap 11 saw Augusto Farfus lose three positions within only two corners when Wehrlein attacked him in the last turn for fifth, allowing other Mercedes drivers Maximilian Gotz and Daniel Juncadella to storm past the Brazilian on the start-finish straight.

The first group of drivers came into the pits to change tyres on lap 13 but race leader Molina stayed out on track before pitting in on lap 15 and handing Mike Rockenfeller the lead.

Wehrlein, meanwhile, had lost three positions during his tyre change and was furious, questioning his team's strategy by asking: "Why didn't you call me in one lap later?"

On lap 20, Wehrlein managed to go past Farfus again on the back straight. One lap later, at the halfway point of the race, Rockenfeller pitted from the lead and Molina retook first position.

Rockenfeller rejoined the race in eighth, his strategy call earning him three places.

Plenty of action in the closing stages

With Rockenfeller breathing down his neck, Wehrlein asked for support from his Mercedes teammate Juncadella in front of him. The Spaniard slowed down to let Wehrlein catch up and Wehrlein soon went past, while Rockenfeller was kept behind.

Soon, the battle between Timo Glock and championship contender Mortara heated up, resulting in Glock pushing Mortara slightly from behind. This, however, was enough to spin Mortara off track and it earned Glock a drive-through penalty.

By the end of the race, Wehrlein had made it up to fifth position, having been let through by Gotz.

Gotz ended up finishing the race in sixth, ahead of Rockenfeller, Farfus, Martin Tomczyk and Juncadella.

The championship resumes in three weeks' time at Hockenheim for the season finale, with four drivers maintaining a shot at the title.

However, it's Wehrlein's to lose, the Mercedes driver leading Mortara, Ekstrom and Spengler by 37, 38 and 46 points respectively.

Audi attacks Mercedes over use of team orders