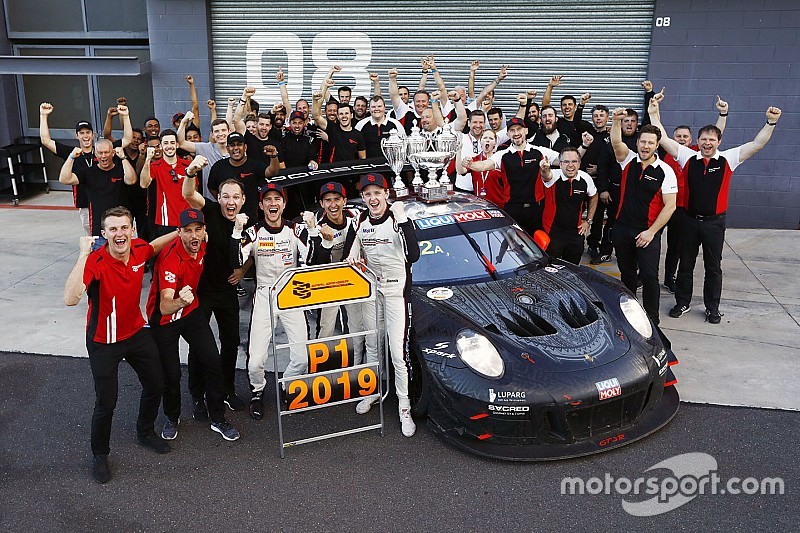 An Australian privateer racer has bought the Porsche 911 GT3-R that took out this year's Bathurst 12 Hour.

Dennis Olsen, Dirk Werner and Matt Campbell combined to secure a thrilling win at this year's round-the-clock classic at Mount Panorama, the latter pulling a daring late move on Jake Dennis to set up the victory.

The Earl Bamber Motorsport-run car was shipped back to Germany and put on display at the Porsche Museum after the Bathurst race.

It's now set for a permanent return to Australia, having been purchased by Sydney-based racer Paul Tressider.

“I was also competing in the same race with the Porsche Carrera Cup Asia team so lots of good memories are associated with this epic win. As an Australian, I wanted to bring the car back home.

“I thought I wouldn’t stand a chance of being able to secure the car. However after the race I caught up with [head of Porsche Motorsport in Asia-Pacific] Alex Gibot and told him I would like to buy it.

"Alex knows my history with [Carrera Cup Asia] and my love of Porsche, plus the car would be coming home to Australia and properly looked after.

“Alex started the process by contacting Porsche in Stuttgart and got the ball rolling, and fortunately we were successful.”

The car will first head to Shanghai for the Porsche Sports Cup China event in October, before completing its return down under, here Tressider will race it in Australian GT.

“I will race it lightly, probably the first event will be Bathurst at Easter 2020,” he confirmed.

“The now-famous livery will stay, the only change will be to wipe off the sticky remains of champagne and, according to Matt, some Bundy and Coke!”