Ingolstadt - Le Mans winners, GT World Champions, a stratosphere jumper and strong customer teams  they all rely on the Audi R8 LMS ultra in the 42nd running of the Nürburgring 24 Hours. For the first time, several teams will be competing in a qualification race on the first weekend in April.

With 190 participants from around the world the 24-hour race in the Green Hell of the Nürburgring Nordschleife on June 21 and 22 marks a highlight on the motorsport calendar of fans and drivers. Like last year, five Audi teams, supported by Audi Sport customer racing, will be putting a total of eight Audi R8 LMS ultra cars on the grid of the classic marathon in the Eifel. 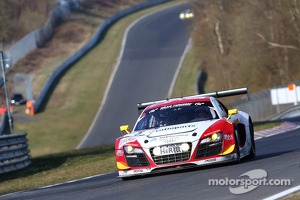 The 24-hour race will be preceded by a little brother. In the qualification race on the 25.378-kilometer version of the Nürburgring on April 5 and 6, the teams will have a valuable opportunity for testing without the pressure of a championship. Many of the teams that will be running in the 24-hour race are using the event with its free practice and two qualifying sessions plus the six-hour race to prepare for the main event.

In the qualification race, the organizers will be awarding ten of the total of 30 grid positions for the top-30 qualifying session in June that will decide the starting order for the 24-hour race. In addition, drivers will be able to demonstrate that they possess the Nordschleife routine required by the regulations. Last weekend, Audi managed a good beginning of the season on the Nordschleife when Marc Basseng/Frank Stippler/Laurens Vanthoor (D/D/B) in the Audi R8 LMS ultra won the first round of the Endurance Championship.

As in the past years, the Audi line-up for the 24-hour race consists of high-caliber drivers. Four former Le Mans winners  Frank Biela (D), Marcel Fässler (CH), Stéphane Ortelli (MC) and Marco Werner (D)  with a total of eleven victories in the classic French marathon under their belt, are driving the Audi R8 LMS ultra. The former GT1 World Champions Marc Basseng and Markus Winkelhock plus the current FIA GT Champion Laurens Vanthoor (B) and the three-time Porsche Supercup Champion René Rast (D) complete the line-up.

In addition, the field includes the current Audi DTM driver Nico Müller (CH) and the former DTM driver Rahel Frey (CH) as well as seasoned Nordschleife campaigners. Following his stratosphere jump, extreme athlete Felix Baumgartner (A) has found a new challenge. He opted for the Audi R8 LMS ultra of the Audi race experience and will be making his debut on the Nürburgring Nordschleife.

Five former winners of the 24-hour race are relying on Audi as well. Marc Basseng (D), Christopher Haase (D), Frank Stippler (D) and Markus Winkelhock (D), who in 2012 celebrated the first victory of the Audi R8 LMS ultra at the Nürburgring, will be on the grid in the 570-hp GT3 race car again in 2014. Nicki Thiim (DK), one of the 2013 winners, will be contesting the race in an Audi R8 LMS ultra for the first time.

Marc VDS head for all-new challenge at the Green Hell