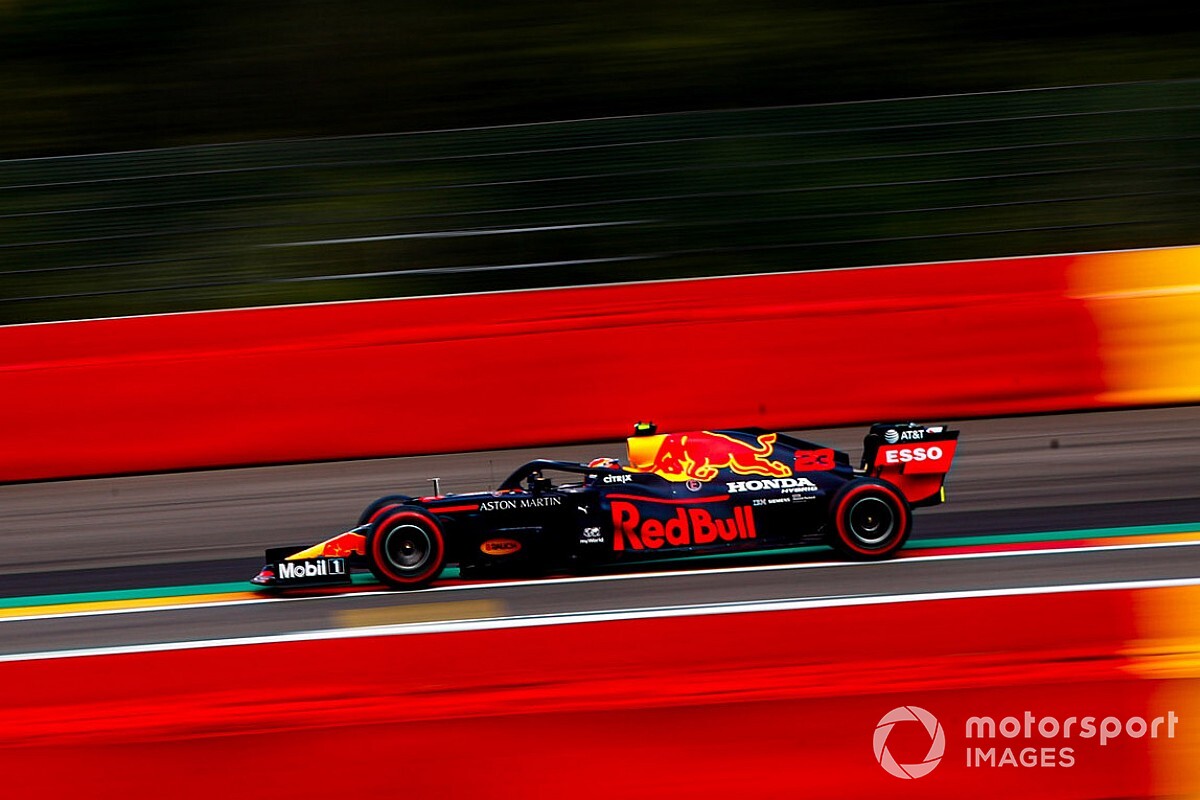 Alexander Albon has found Red Bull's Formula 1 car to be "more predictable and consistent" through the Belgian Grand Prix weekend so far after qualifying fifth at Spa.

Albon struggled at points earlier in the season with the unpredictable and skittish 2020 Red Bull car, and has failed to match teammate Max Verstappen's pace so far this year, scoring less than half as many points.

But after reporting greater confidence with the RB16 in practice on Friday, Albon put in one his best qualifying displays of the season so far by taking fifth on the grid, finishing half a second behind Verstappen.

"I'm taking the positives from it, definitely," Albon said after qualifying.

"The car felt good from FP1 to be honest, and from then on it was just an improvement each time. It didn't feel like we had to chase anything too much. It was just fine tuning it so when we arrived to qualifying, it wasn't like a big surprise.

"It's been a good step. I think it's been something which we've been working on on my side of the garage, and we're going in the right direction, that's for sure."

Albon had been able to feel a step in confidence with the Red Bull car from the early moments of the weekend, finding it more predictable.

The Anglo-Thai driver confirmed some additional parts Red Bull had brought for the car at Spa had helped him grow more comfortable behind the wheel.

"When you drive the car, the first few laps, even the first few corners, you can feel if it's balance-wise if you're happy or not.

"With this car here, now I'd say, from that kind of entry phase into the corner, it feels more predictable, more consistent to drive I think.

"Max and I have been talking about having a more predictable and consistent car. The stuff we've brought here has not necessarily addressed that downforce, it's just helping those areas, and it's positive."

Red Bull F1 chief Christian Horner said Albon's advancement was "good to see", believing his return to the circuit where he made his debut for the team had also worked in his favour.

"We've done a lot of work between Barcelona and here to try and settle the car down for him, particularly on low fuel.

"I think the fact that it's the second time he's at a venue with our configuration of car, he knows what more to expect and I think we have managed to improve the car a little for him.

"It's good to see. He's got the potential, we know he races incredibly well, so hopefully he's starting nearer the front and he can put in a good performance tomorrow."