Fernando Alonso says he prefers it when Formula 1 chiefs take a "zero tolerance" approach to track limits, even though he fell foul of such a stance in Mexico last weekend.

The Spaniard had his time in Q1 deleted for leaving the track at Turn 11 on his first run in qualifying – even though he had only done so to avoid causing a crash and had gained no advantage.

While that decision put him on the back foot, he says he prefers it when the rules are clear – as they were at the recent Fuji WEC round when his car lost pole position for abusing track limits.

“I prefer when it’s zero tolerance,” said Alonso when asked for his views on track limits policing.

“In Fuji [WEC] we crossed the white line by one centimetre and they delete the laptime, and we were not on pole position because of that.

“They don’t consider if it was a mistake, a correction, or a pure gain in time, it’s just the line is there, and if you cross the line they delete the lap.

"They do it in other series and it works fine, so I’m happy with how it works.”

Alonso recovered from the Q1 incident in Mexico to qualify 12th but his hopes of taking a good points tally were wrecked by a freak incident when his car was damaged after being hit by debris.

“We were unlucky with some of the debris from the Force India in front of us landing in our car,” he said. “It's a one in a million possibility to have a DNF, but it happened.

“It's the way it is. I think even if now I feel a little bit sad not to be in the car, the day in general was very emotional and magic with all the support and all the fans.

"I think overall it is going to be a good memory from this Sunday even with the retirement.” 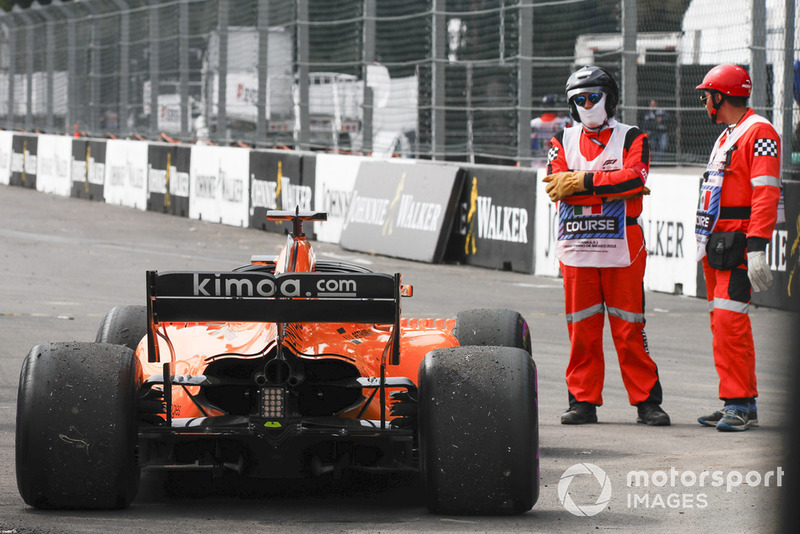 Fernando Alonso's McLaren MCL33 after retiring from the race