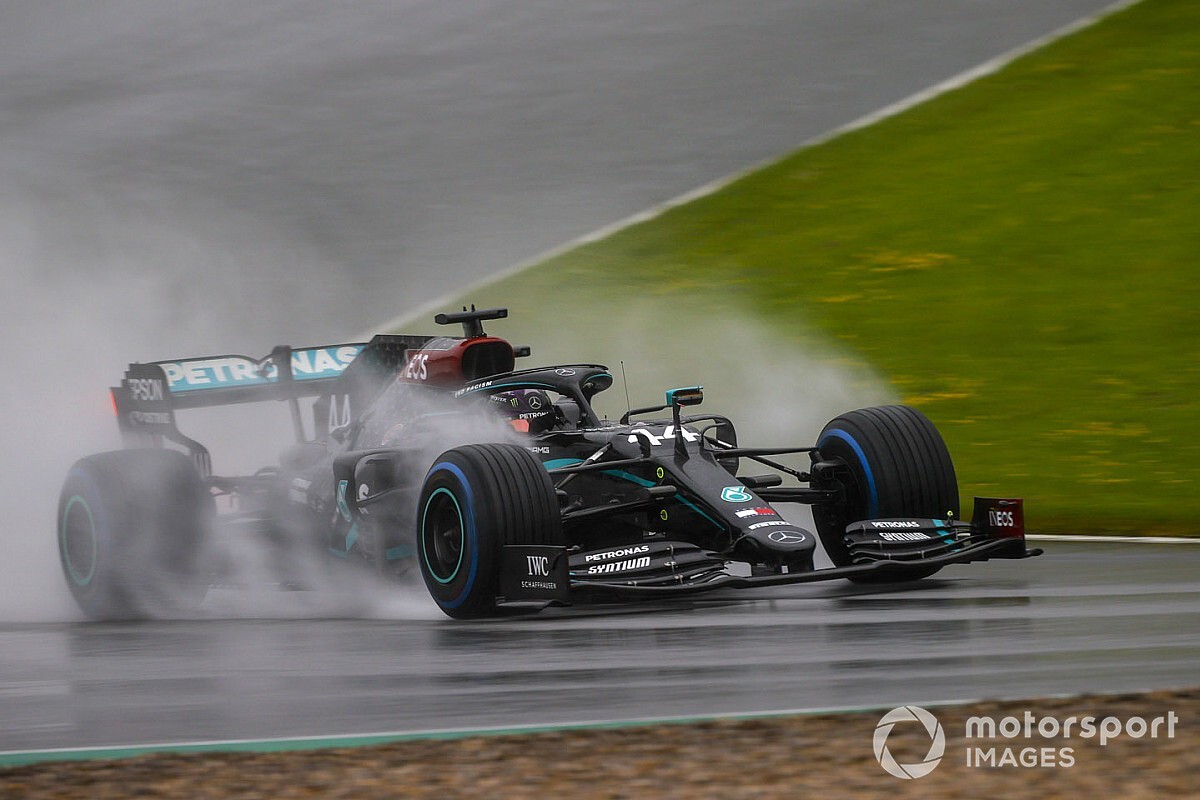 Lewis Hamilton says the wet conditions during his charge to pole for the Styrian Grand Prix reminded him of his much-lauded Formula 1 victory at Silverstone in 2008.

Hamilton charged to the 89th pole position of his F1 career in heavy rain on Saturday at the Red Bull Ring, with conditions forcing the session to initially be delayed by 45 minutes.

Hamilton produced two laps good enough for pole position, but his final improvement took him over 1.2 seconds clear of the rest of the field.

Speaking after qualifying in Austria, Hamilton explained that the feeling of being at one with the Mercedes W11 car in the wet reminded him of his experience at Silverstone in 2008, when he won the British Grand Prix by over a minute in heavy rain.

"It was a fantastic lap, the last one," Hamilton said. "I think [it was] just the importance of managing your time out there, managing your battery pack, knowing when to use the few laps that you have on the qualifying modes, creating the gap, [and] not making a mistake when it counts.

"That last lap for me was really as close to perfect as I could really get in those conditions. Considering it was raining more, it makes me even happier knowing that we could go a bit quicker during that time.

"It definitely takes me back to times like Silverstone 2008, because when you're really at one with the car and not fazed at all, and just being very dynamic with your driving style from corner to corner.

"The wet patches arrive, and the puddles are shifting about with the cars that are driving ahead of you, which is a massive challenge."

The wet conditions caused a number of drivers to have big off-track moments, including Max Verstappen, whose final bid to deny Hamilton pole ended in a spin at the final corner.

"It was the worst conditions that we could probably get these cars around in," Hamilton said.

"It was an incredible challenge. I'm grateful that we got to do qualifying, as we missed the morning session. It's a real challenge I think for everyone.

"Visibility was very, very minimal, and just making sure you got the gap and putting the laps together when it counted was really the key.

"But the team did a great job in terms of the position and the information I was getting. I felt pretty much at home today in the rain."

Asked by Motorsport.com about the decision to go ahead with the session given the conditions, Hamilton praised the FIA race officials for going ahead.

"The officials definitely have a difficult job the majority of the time, particularly on a day like this knowing when to go and when not to let the cars run," Hamilton said.

"I'm grateful they did. Just as we came to qualifying, it was drying up or wasn't raining for a while, and just as everyone got in the car it started to rain again. We obviously had that pause, but once we got going, it was fine for the first session, then it did get worse.

"It was definitely on the limit, but that's racing. I'm glad they didn't take that away from us, because today, it's so special being out there, it's so difficult.

"I don't know how it comes across on the cameras, but it is the hardest conditions that we ever drive in.

"Just one small lapse of concentration and you're off, it can be big or small, more chance of it being a big one."