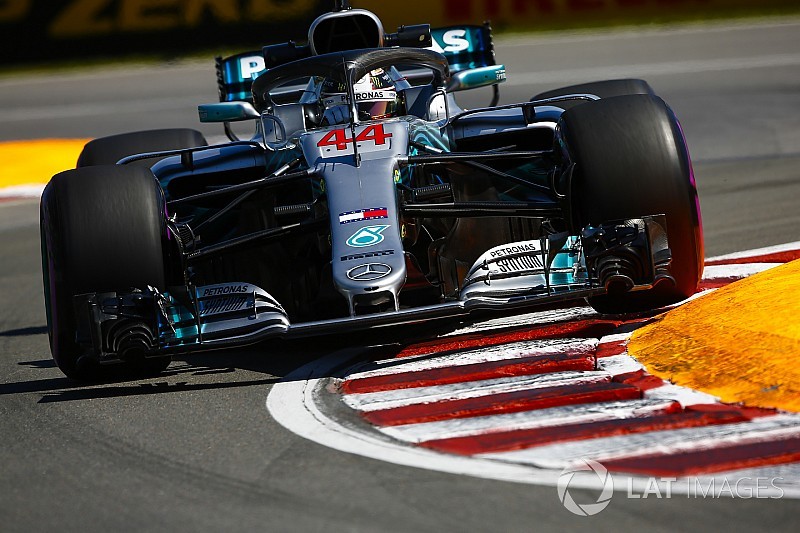 Lewis Hamilton believes it would be a "sign of weakness" to believe that Mercedes does not have a car capable of helping him secure his fifth Formula 1 title this year.

Hamilton could manage only fifth in the Canadian Grand Prix last weekend, having finished third at the previous race in Monaco.

Ferrari rival Sebastian Vettel took the lead of championship with victory in Montreal.

Although that run and Ferrari's resurgence have been frustrating, Hamilton says he has no doubts about his team's potential to fight back.

When asked if had concerns that Mercedes' car was not good enough to get him another title, he said: "I don't let that get into my mind, no. That would be the first sign of weakness, and my mind is not weak.

"I'm still here to win, I still believe we can win. I have complete confidence in my guys and I'm putting that energy towards them.

"If you think of tennis, or golf, or whatever, in tennis if you look across the net and think 'I might lose this,' you've already lost.

"It doesn't matter where I start on the grid, I don't look at any driver and think, 'I might lose to that person.' I'm like, 'How can I beat them? How can I be better?' And I'm going to keep doing that until I die."

Hamilton acknowledged that Mercedes can no longer claim to have the best car on the grid.

"I think we've got potential in this car. Hopefully when you guys are writing stories, I think last year there was 'Mercedes had the best car' and all those different things – and ultimately we did the better job.

"You probably shouldn't be writing that right now, because we are not always outperforming the others, but also it's very close. The Red Bulls are in the mix every now and then, Ferrari have so far been the most consistent, but there's a lot of races to come.

"These engines have to go a long way. There are going to be things happening, we don't even know what, when."

Hamilton, now trailing Vettel by one point, said he was fully behind his team.

"I'm really proud of my guys here, they are continuously working so hard, still pushing. It's definitely tough when you feel like you have done everything right and you don't get the result.

"Every single person within the team feels the pain, but we win and we lose together, so it's just about lifting each other up, pulling together.

"There's still a long long way to go. There are good days and bad days ahead.

"We can't guess when they are going to be, but all we can do is try to prepare the best we can, try to minimise the bad days, the losses, and capitalise on the big days."

Alonso: State of F1, not McLaren form, key to my future