Brendon Hartley says he is “not allowed to comment” on a remark he made disputing Toro Rosso’s claim that Pierre Gasly’s Formula 1 car was damaged last weekend.

His team boss Franz Tost said on Friday ahead of this weekend’s Mexican Grand Prix that Hartley needed to do more to keep his drive.

Asked if the aerodynamic upgrade Hartley has this weekend could facilitate the sort of form Toro Rosso is looking for, Hartley repeated his recent rhetoric that he is performing well enough.

He also went against the team’s report after last weekend’s United States GP that Gasly was limited by damage was untrue.

“I’ve been improving all season and I haven’t always been given the opportunity in the races, having a strategy that would help the other car, or us being very close in qualifying but just missing out and that being the difference between points,” said Hartley.

“I feel like I have got stronger all season. I proved that in Austin, despite what it says in the press releases there was nothing wrong with the other car in the race.

“I did a really good performance and was really happy to score those points.

“I know I’ve been doing a good job and been a big help to the team in terms of development with Honda and been a team player all season.

Gasly and Tost were both quoted in Toro Rosso’s post-race press release commenting on damage to Gasly’s floor, a communication that the team stands by.

Asked after qualifying in Mexico on Saturday if he felt he needed more support from the team, given it sticks to its release, Hartley said: “No comment.”

Asked if he stood by his own remarks or had any new information regarding the situation, Hartley replied: “I’m not allowed to comment on that.”

Gasly reiterated his floor was damaged when asked to describe it by Motorsport.com.

He said the first impact occurred when he ran off-track avoiding the crash between Lance Stroll and Fernando Alonso at the esses on the opening lap and he had “a pretty big jump”.

Then further around the lap he said “there was like a big piece of carbon that everyone avoided in front of me and I took it straight under the floor”, and described how the balance and performance of his car was impacted for the rest of the race.

Asked about his relationship with his teammate, Gasly said: “He’s under a lot of pressure so at the moment he seems to look at things in a bit of a different way than at the beginning of the season.”

On the comments Hartley made about the Austin damage, Gasly said: “At the moment he says a lot of things. 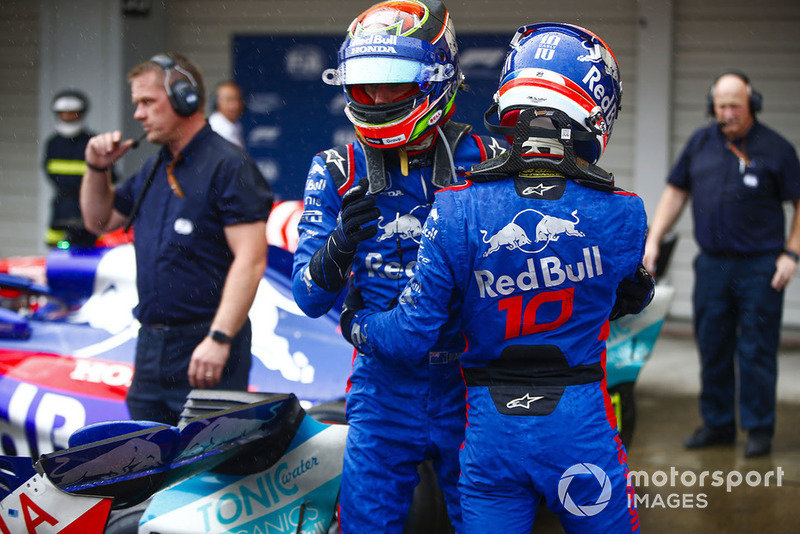