Two weeks after becoming the seventh different winner in seven different FIA Formula 1 events to start the season, McLaren/Mercedes driver Lewis Hamilton has set his sights on becoming the year’s first repeat winner as the series heads to Valencia.

The new championship leader after his win, Hamilton is far from content that his job is done, as the veteran knows that his advantage in the points could disappear in a single corner.

“My win in Montreal was obviously an extremely satisfying moment for me – but, actually, it does very little to alter things in the world championship,” Hamilton said. “I’m only two points ahead of Fernando [Alonso] – which is nothing, particularly when there are a handful of really strong drivers all separated by a couple of points, so there’s still everything to play for. The intensity of this year’s championship means there’s so little breathing space. There’s an enormous amount of pressure to keep racking up good results at every grand prix. I think that consistency, rather than individual strong results, will be the key to winning this world championship.”

The Valencia street course – home to the European GP since 2008 – is a stern test for man and machine with cars going from nearly 200 mph to a first- or second-gear corner four times per lap. 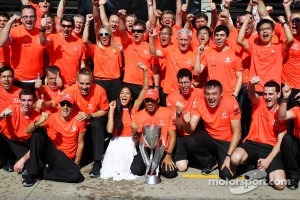 The McLaren/Mercedes squad has earned runner-up finishes with Hamilton in three of the last four trips to Valencia, but is still looking for that first win in the Spanish city. Jenson Button, who struggled after missing Friday practice in Montreal, already has a win on the streets on Melbourne this year, and is looking to carry that success over to Valencia as well.

“Canada was just one of those weekends where things didn’t come together,” Button recalled. “I really needed the track time on Friday to find a clearer direction with the set-up, and, unfortunately, that didn’t happen due to a number of technical issues. Still, there were important lessons to be learned from those issues, and we addressed everything back at MTC once we’d returned from Canada in a bid to get a clearer direction for Valencia next weekend. Valencia is a track I really enjoy; I’ve already won on a street circuit this year so I’m definitely optimistic about having a great weekend and picking up the momentum again in the title fight.”

The team is just 31 points behind the front-running Red Bull Renault, with Lotus and Ferrari a similar distance behind McLaren in third and fourth respectively. That constant pressure at the top of the queue keeps the wheels of progress turning according to Team Principal Martin Whitmarsh.

“Given that the delta between ourselves, Ferrari, Mercedes-AMG and Red Bull Racing is so narrow, we’ll once again be pushing hard on both our operational and technical fronts to ensure we stay at the front,”Whitmarsh said. “As always, we aim to bring at least an additional one-tenth [of a second] laptime benefit to each race, and we’re pushing hard to ensure we can over-deliver on that on as regular a basis as possible. It may sound like a negligible increment, but it could prove to be the difference between winning and losing the world championship.”