The team finished the 2013 season with a total of 360 points and a total of three wins, six further podiums and eight pole positions.

Nico Rosberg finished P5 this afternoon on a two-stop strategy, running option/prime/prime with stops on laps 22 and 44. Lewis Hamilton finished P9 after making two pit stops (laps 21, 47) and serving a drive-through penalty on lap 52. Lewis also ran a tyre strategy of option/prime/prime and completed his 18th finish in 19 races in the 2013 season . 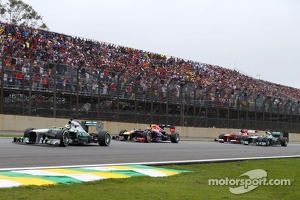 Nico Rosberg, Mercedes AMG F1 W04 leads at the start of the race

Nico Rosberg (P5 1:16.442): "Today is a great day for the team and to finish in second place in the Constructors' Championship is a huge step forward for us.

My thanks to everyone who made our success possible and congratulations to the team here at the track and back at our factories.

It was certainly an interesting race today; I had a perfect start but then I struggled a lot with my rear tyres in the opening stint and lost a few positions. We could have cleared Jenson in the pits but it was better for us to be conservative and focus on our battle with Ferrari. I'm so happy that we have achieved our aim and now everyone can look forward to a break and the new challenge of 2014.

It's a huge project and there's a lot of work ahead over the winter. I'm very much looking forward to working with the team to put us in the best possible position for next season."

Lewis Hamilton (P9 1:16.692): "Firstly, congratulations to the team today for achieving second place in the Constructors' Championship. That result means so much to everyone and I'm so grateful to have been a part of it this year. From my side, it was a tough race today. I don't know what happened exactly with Valtteri and will have to have a look at the replay.

I thought that I had moved to the left, he outbraked me and then we touched but it happened so quickly and it was obviously judged that I did something wrong. I was having a good race until that point in fourth place and a podium might have been possible as I was closing on Fernando. That's why I'm so disappointed with my own race but of course I'm delighted for the team. They have done an incredible job this year and really deserve this result.

It's the reward for what I know has been many years of hard work and my thoughts are with everyone here at the track and back at our factories at Brackley and Brixworth. We've got so much to look forward to next season so I'll put today behind me quickly and focus on what should be a great year in 2014."

Ross Brawn: "Well, I've certainly got a few more grey hairs after that race! Both cars made fantastic starts but it was soon clear that we hadn't found the sweet spot with the car balance for Nico and he was struggling for rear-end grip. Lewis was stronger in the opening stint and showed good pace before and after his first stop. Our race obviously turned on the two drive-through penalties for Felipe and Lewis.

Our drivers had been reporting that Felipe was consistently crossing the white line at pit entry with all four wheels and when the FIA eventually took action, that obviously helped us. Then we had Lewis' unfortunate incident with Bottas and we have to take that one on the chin as we should have kept Lewis better informed of just how quickly the Williams was closing, even though he was a lap down. He then drove strongly after the penalty, especially considering his floor was damaged by the flailing tyre.

But the key thing today is that the team secured second position in the Constructors' Championship, even though we made rather hard work of it. That was done on the basis of a very good step forwards and one we made for good reasons. My thanks and congratulations to everyone at our team for all of their hard work, dedication and commitment. Red Bull have been extremely dominant in 2013, and congratulations to them. But our progress is the first fruits of the technical team we began building two years ago and I am optimistic that the trend of progress will continue in 2014."

Toto Wolff: "Our target today was to secure second position in the Constructors' Championship; we achieved that target and that's what counts. Ferrari, and Fernando in particular, made life extremely hard for us in the first half of the race and that kept us on our toes and gave us some nervous moments. Lewis' incident with Valtteri was unfortunate; we must be glad that it did not ultimately cost us any positions in the standings and learn our lessons from it.

Thank you to everyone at the team, both at the track and at our factories, for their efforts and please keep up the hard work! Congratulations also to Red Bull, who once again showed incredible pace and have set the standard this season. From tomorrow, our attention will be fully focused on 2014 and taking another significant step forward in performance."

Toro Rosso end the year with a point at Interlagos