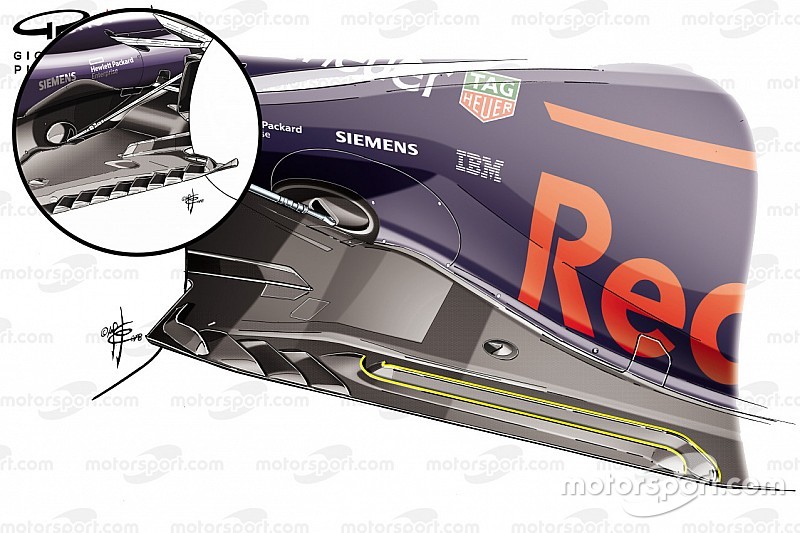 They might not be direct rivals on track in Formula 1 right now, but this hasn't stopped Red Bull from taking cues from McLaren in the latest design of the RB14's floor.

Max Verstappen’s ability to take Hockenheim’s Turn 1 flat out during qualifying – and being the first man in Formula 1 to do that – shows just how good Red Bull’s chassis is.

But the team has not rested on its laurels at all, and has been aggressively developing the car in a bid to try to keep Mercedes and Ferrari on their toes.

At the German Grand Prix, Red Bull followed a design path that was initially trodden by McLaren and then followed by Renault and Ferrari in changing the concept of its floor slots.

Rather than utilising a series of angled slots ahead of the rear tyre (inset) the team added two longitudinal slots placed on the floor's edge (highlighted in yellow) to complement the four now fully enclosed holes ahead of the tyre.

The idea is that the airflow passing through these long slots energizes the vortex that’s being formed on the floor’s edge, helping to seal it and create a sort of air skirt, improving the overall performance of floor and diffuser. 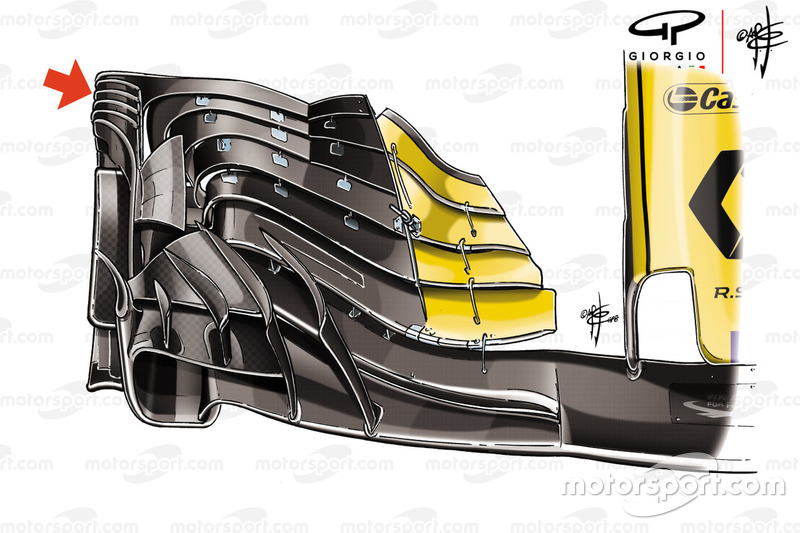 Renault has been trialling several variants of its front wing in recent races, as it tries to resolve an issue it has on turn-in for mid-high speed corners.

Taking the data captured during these tests and heading back to the drawing board resulted in a new front wing concept being utilized at the German GP.

The new wing retains some of its predecessors’ DNA, but also sees an injection of fresh ideas too.

The main alterations are clear. First of all, the trailing edge of the endplate has been divided up into four acutely angled surfaces to promote outwash around the front tyre (red arrow).

That’s why we often see a change in their number or chord length, depending on the track characteristics. However, this new design from Renault moves the adjuster much further outboard, changing the proportional effort of the flaps, resulting in only the outer part of the flap (painted yellow) being affected by an angle change.

Why F1's 18-inch tyre conundrum is not straightforward

Is Hamilton really worth £40million?