Lewis Hamilton dominated final practice for the Spanish Grand Prix as a late off for George Russell prevented any final improvements ahead of Formula 1 qualifying. 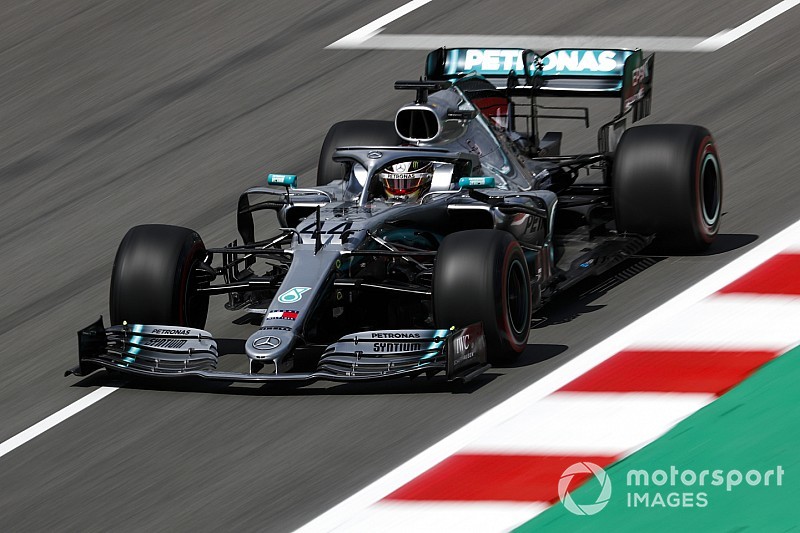 Mercedes driver Hamilton enjoyed a commanding advantage over the chasing Ferraris in FP3, which ended under red flags when Russell lost the rear of his Williams at Turn 4 and ended up in the wall backwards after travelling through the gravel.

However, it did nothing to impact the gap Hamilton had over the next-best driver, Charles Leclerc.

Hamilton's eventual best was a 1m16.568s, more than half a second clear of the two Ferraris.

Leclerc pipped Sebastian Vettel by 0.073s, a tiny margin that was still big enough for Valtteri Bottas to slot into and steal third from Vettel.

Bottas's session started badly when he caused a seven-minute red flag by spinning on his out-lap at Turn 5 and beaching his car in the gravel.

After the Mercedes was recovered Bottas did join the action but the Friday pacesetter ended up 0.555s slower than teammate Hamilton.

Vettel, demoted to fourth by Bottas's improvement, had his own spin when he lost the rear mid-corner at the chicane early in the session.

He ended up only a fraction faster than the leading Haas of Romain Grosjean as the American team challenged the established frontrunners in final practice.

Grosjean believes Haas can "play" with Red Bull in Spain and his pace in FP3, 0.624s off the pace and within a tenth of both Ferraris and Bottas.

Kevin Magnussen also got ahead of the two Red Bulls in the second Haas, lapping sixth fastest and 0.962s off the pace.

Max Verstappen was Red Bull's leading man, partly thanks to Gasly being denied a final run.

Verstappen was fractionally slower than Magnussen, 0.990s behind Hamilton, but encountered traffic in the final sector of his first lap on new tyres at the end of the session.