Most times people cheer for a winner, of any event, but our number 3 top moment of 2013 was the booed dominator who was sent negative vibes from the crowds at six different grand prix in 2013.

By now, everyone knows that Sebastian Vettel dominated yet another year in Formula One, claiming his fourth World Championship.

The young German champion never seemed to falter once this season, and it award him with another championship, and a load of trophies to fill up his house.

But it seemed like Vettel spent more time on the podium being booed than applauded.

In total, Vettel found himself being booed on the podium at 6 races this year. Watching one driver dominate the competition does have its frustrating aspects, but there is no reason to boo a driver for his success.

Earlier in the season, Vettel ignored team orders to pass his teammate Webber for a race win, which team design chief Adrian Newey said could be the reasoning for the booing, but in the end there is no clear explanation.

During the season, it came out that the Tifosi, the diehard fans of Ferrari, were the ones doing the booing. Then it was the Mercedes fans. 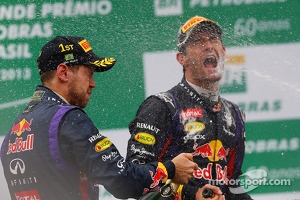 Either way, it was sad to see the success of a team booed. It takes more than a talented driver to win a title and when you are booing the man on the podium, you are booing the entire team that is working towards that one single goal.

"It's very difficult for me personally, to receive boos, even though you haven't done anything wrong. At the time it hurts not to get the reception you expect but I think I'm clever enough to understand why they do it. I'm not blaming them,” Vettel said.

“Maybe if I was a fan of McLaren, Ferrari, whatever, one of the traditional teams, I wouldn't like it if the same kind of guys, same team wins again and again. The most important thing for me is to get the respect from people that I know and people that I race against.”

Adieu to the V8, interview with Rémi Taffin, Renault's head of track operations