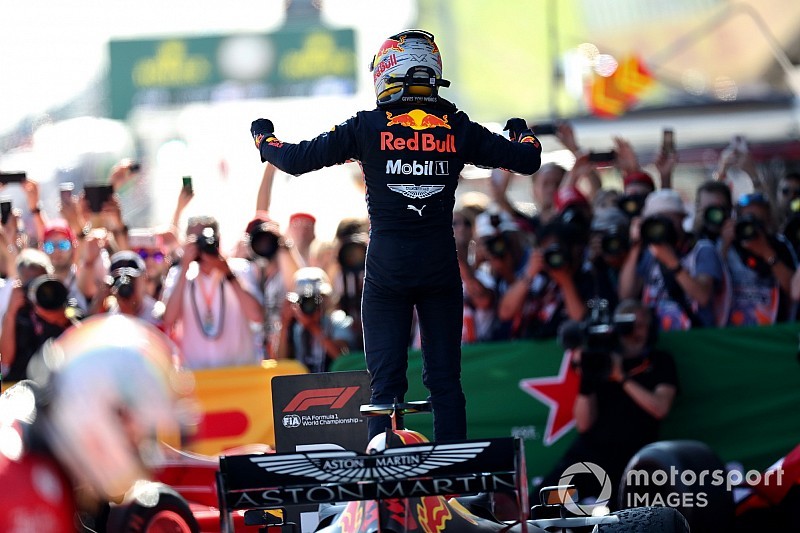 Verstappen escaped punishment after he and Leclerc made wheel-to-wheel contact that pushed Leclerc off-track while fighting for the win in Austria, as the stewards believed both drivers had a role to play in the incident.

The clash has been compared to controversial five-second penalties applied at the previous two races in Canada, where Sebastian Vettel lost victory, and France, where Daniel Ricciardo lost a points finish.

Those incidents sparked major debate over what should and should not be allowed in F1 and drew major criticism for the championship as well.

After the decision not to punish Verstappen, Ferrari F1 team boss Mattia Binotto said “clear rules” exist to prevent drivers like Leclerc being forced off the road and that these were “exactly the same rules which have been applied in past races”.

However, when asked by Motorsport.com to explain the difference, FIA F1 race director Michael Masi said comparing such incidents was “effectively trying to compare apples and oranges”.

In the cases of Vettel and Ricciardo, penalties were applied because they were judged to have forced their rival off-track after going off the track themseves.

Vettel went off while leading in Montreal and bounced across the grass, then was deemed to have rejoined unsafely and forced Lewis Hamilton wide as the Mercedes driver tried to pass him.

In France, Ricciardo attempted to make a pass on Lando Norris but ran deep into the chicane, went off-track with all four wheels but still tried to keep the inside line for the second part of the corner, which forced Norris to go off-track on the outside.

Unlike Vettel, Verstappen was making a legitimate overtaking attempt when his incident occurred, and unlike Ricciardo, Verstappen remained in control of the car at all times and did not leave the circuit.

“Each and every incident needs to be considered on its own merit, different corners, different profiles, different circumstances,” said Masi. “Trying to compare the three of them, they are three very different incidents.

“In the stewards’ view it was a racing incident. It was just good, hard racing from the perspective they saw.”

Verstappen had tried to pass Leclerc on the previous lap at the same place, the Turn 3 right-hander at the top of the hill, but Leclerc held on around the outside.

When asked by Motorsport.com to talk through the incident, Masi suggested that the stewards felt Verstappen had “learned what had happened a lap earlier” and the nature of the move was fundamentally different second time around.

“He went into the corner, braked later, Charles obviously saw him coming and stayed out wide,” said Masi.

“And Max, in braking a lot later, ‘late-apexed’ and at all times was pretty much on full lock and tried to power out. The same thing that happened the lap previously didn’t occur again.”

In making their decision, the panel of four stewards – which included Le Mans 24 Hours legend Tom Kristensen – looked at previous incidents and past precedent.

This included the clash between Hamilton and Nico Rosberg in Austria three years ago, at the same corner as Verstappen and Leclerc collided.

On that occasion, Rosberg – on the inside, like Verstappen – was punished, but again the incident was different because Rosberg was trying to defend the position not make an overtake.

“The big difference between the footage I’ve seen of the two is that Nico looked across on that occasion,” added Masi. “Whereas Max is very much focusing on the corner and getting out of it as quickly as possible.”

Honda's Tanabe explains why he was late to Austria podium