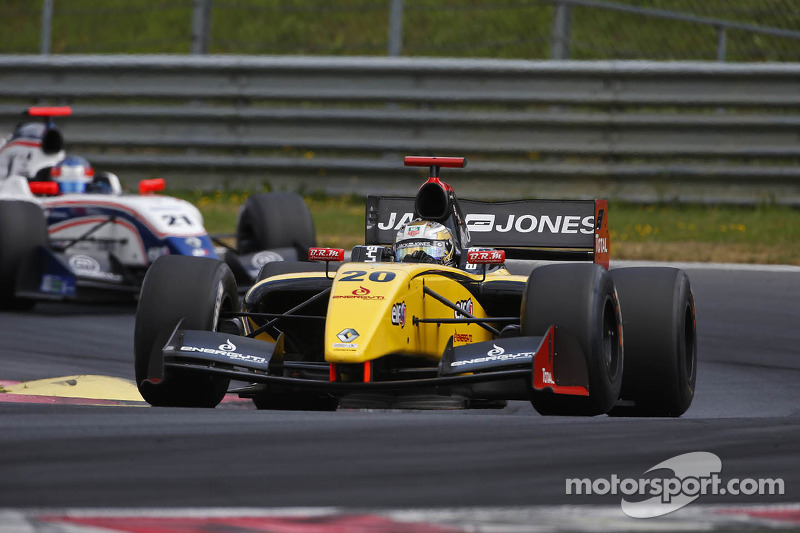 Kevin Magnussen (DAMS) started the weekend on a run of five straight podium finishes, but had not won since Spa-Francorchamps and was anxious to secure his third Formula Renault 3.5 Series victory. The Dane duly delivered at Paul Ricard, winning race one from Antonio Félix da Costa (Arden Caterham) and Stoffel Vandoorne (Fortec Motorsports) to take a big step towards the title.

In qualifying this morning, Kevin Magnussen secured his fifth pole of the year in the Formula Renault 3.5 Series. At the end of a hard-fought session, the Dane finished ahead of rivals Stoffel Vandoorne (Fortec Motorsports) and Antonio Felix da Costa (Arden Caterham).

Nico Müller qualified in fourth, but had the misfortune of stalling before the formation lap. At the start, Kevin Magnussen narrowly held his lead from Antonio Felix da Costa, Stoffel Vandoorne and André Negrão (International Draco Racing), with the latter having started from seventh. Arthur Pic (AV Formula) made the best getaway, starting from 12th and moving up to sixth by the end of lap one. Lucas Foresti (SMP Racing by Comtec) was the only driver to retire on the opening lap.

The battle for the lead involved the championship’s top three drivers, and the trio traded fastest times in the opening laps. Halfway through the race, Kevin Magnussen picked up the pace and stretched his advantage. In the chasing pack, DRS proved pivotal on the Mistral straight. Carlos Sainz (Zeta Corse) used it to pass team-mate William Buller and Arthur Pic, leaving Pic to fight it out with Nikolay Martsenko (Pons Racing) for the remaining points positions.

But ultimately it was a comfortable victory for Kevin Magnussen, who crossed the line ahead of Antonio Felix da Costa and Stoffel Vandoorne. André Negrão (International Draco Racing) sealed his best result of the year by finishing fourth, followed by Marco Sorensen (Lotus), Will Stevens (P1 by Strakka Racing) and Arthur Pic. Nikolay Martsenko worked his way up from 17th to finish eighth, ahead of William Buller and Daniil Move (SMP Racing by Comtec). Move completed the top ten, after Carlos Sainz had retired on the final lap.

Kevin Magnussen: "It’s been a great day. Our pace was really good, both in qualifying and in the race. I’m very pleased to be back winning again. I’m trying not to think too much about the championship, and instead maintain the pace and keep pushing."

Antonio Felix da Costa: "I made a very good start. Kevin then made a slight mistake that allowed me to get closer on the back straight. He defended flawlessly, and from then our pace just couldn’t match Kevin’s. Congratulations to him."

Stoffel Vandoorne: "I think the title race is all but finished. He [Kevin Magnussen] only needs a few more points to win the championship. It is still possible, but it’ll be a very tough task. Kevin has had the perfect start to the weekend, and we’ve done as well as we possibly could."